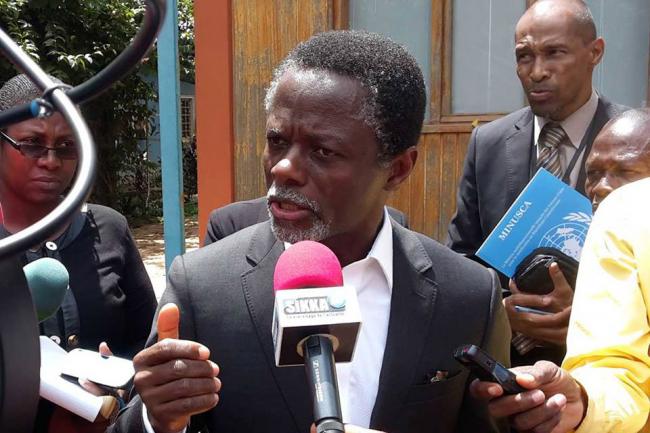 In Op-Ed, UN envoy details Organization's measures to root out sexual exploitation in its peace missions


“A few days ago, I woke up to yet another horrible allegation against peacekeepers serving in the UN mission in the Central African Republic, the peacekeeping operation that I lead,” Parfait Onanga-Anyanga began.

“I read that peacekeepers had allegedly raped a 14-year-old girl in a small town in the remote central regions of this massive country. As I began to react to this deeply shocking news, we learned of another series of new allegations dating back to 2014 and 2015, brought to my attention by colleagues from UNICEF [the UN Children's Fund] and the UNHCR, the UN's refugee agency,” he said, stressing that he has “no words strong enough” to describe the distress he feels when confronted with these “appalling” allegations.

“I am overwhelmed by deep feelings of despair and anger. My colleagues in the mission and at UN headquarters feel just as I do. And yet, as awful as this scourge may be, it is my job to put an end to it in my mission,” he stated.

Noting that “walking away is not an option,” and that he is committed to giving this his all, the UN envoy said efforts must not stop until it is ensured that “all the perpetrators are identified, the victims get all the care they deserve and, perhaps most importantly, those responsible are brought to justice.”

“Since I joined this mission in late August 2015, I have committed myself and the mission to a policy of transparency and accountability. I have travelled thousands of miles around this country, going from camp to camp and from city to city, reiterating a stern message that sexual exploitation and abuse are entirely unacceptable and reminding all our UN personnel, both uniformed and civilian, of our obligations to protect the people of the Central African Republic,” he said.

“This journey led us to some harrowing encounters with family members of survivors of sexual assault by armed groups and by international peacekeepers, both UN and non-UN. And while I am disappointed that the mission I lead is registering the highest number of sexual exploitation and assault cases among all UN peacekeeping missions, I have also been encouraged by the positive feedback I have received from victims, from the population and national authorities but also from UN member states on the strong and principled posture the mission has adopted to tackle this important issue,” he continued.

Emphasizing that “this will be a collective effort,”  Onanga-Anyanga highlighted that over the past few weeks, his “spirits were lifted” by the recent adoption on 11 March of resolution 2272 (2016) by the UN Security Council, “which fully backs the Secretary-General's strong leadership in rooting out sexual exploitation and abuse from UN peacekeeping missions,” he added.

“Under this new resolution, should troop or police from contributing countries not prosecute their own alleged perpetrators within six months, the Secretary-General will be entitled to repatriate entire units, as he recently did with troops from the Democratic Republic of the Congo and from the Republic of Congo,” he explained.

Another source of hope in making a more effective impact in the fight against sexual exploitation and abuse, he added, came from the Secretary-General's recent appointment of Jane Holl Lute on 8 February as his special coordinator on improving the United Nations' response to sexual abuse and exploitation by peacekeepers.

“On our side, I have made the fight against sexual exploitation and abuse one of the Mission's top priorities. A task force has been established. The mission's force and police are conducting patrols around the mission's camps to monitor the off-duty activities of uniformed personnel,”  Onanga-Anyanga noted.

“Under my direct leadership, Regional Sexual Exploitation and Abuse Joint Prevention Teams are being established in our three regional headquarters and in other field offices with a significant presence of our troops. These are steps in the right direction, but we may have more dark days before we see light at the end of the tunnel,” he warned.

Above all, the UN official said victims must be put at the heart of all efforts. “We put a premium on their care by making emergency assistance available, while closely coordinating with all relevant UN and non-UN offices and agencies for longer-term support, such as the UNHCR, UNICEF, the UN Population Fund or Mercy Corps and others,” he insisted.