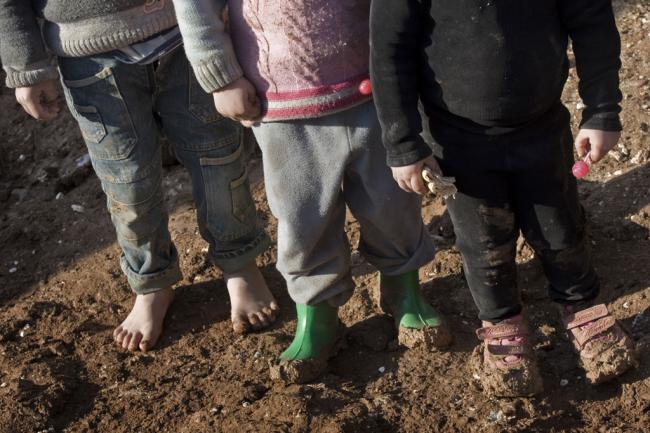 One in 10 Syrian refugees will need resettling, UN agency warns ahead of conference

India Blooms News Service | | 30 Mar 2016, 07:51 am
# Syrian refugees, #UN agency, # Geneva
New York, Mar 30 (Just Earth News/IBNS): Supporting refugees is a global responsibility that must be widely shared, the UN refugee agency stressed on Tuesday ahead of a one-day high-level conference it is hosting in Geneva tomorrow, focused on refugees from Syria and the need for generating a substantial increase in resettlement and other answers for their plight.


"Refugees fleeing conflict and violence and arriving in Europe carry an important message: addressing their plight cannot only be the task of countries and communities that are close to wars. It is a global responsibility that must be widely shared until peace prevails again," UN High Commissioner for Refugees Filippo Grandi said in a press release.

"Giving at least some Syrian refugees an opportunity to move on to better lives, and relieving the burden on countries hosting millions of refugees are important gestures of solidarity. Let us not miss this opportunity,"  Grandi added.

The conference is one of several key events in 2016 focused on Syria's refugees. It follows February's London Conference on Syria, dealing with the financial dimensions of the humanitarian challenge posed by the more than 13.5 million people in need inside Syria and the 4.8 million refugees in the surrounding region, along with the needs of communities in host countries. Tomorrow's gathering is also in the run up to September's summit on refugees taking place at the UN General Assembly in New York.

The Office of the UN High Commissioner for Refugees (UNHCR) underlined that the focus of tomorrow's meeting is on the need for expanded, multi-year programmes of resettlement and other forms of humanitarian admission, including countries that until now have not been involved in such initiatives.

The dangerous boat ride to Greece through the eyes of a Syrian refugee girl. Credit: UNICEF

The agency also stressed that resettlement is not the only aim – other such pathways include humanitarian transfer or visas, private sponsorship, medical evacuation, family reunion, academic scholarship, and apprenticeships or labour schemes. The event will also showcase innovative approaches, new partnerships, and successful case studies, and is being presented as an opportunity for governments around the world to be part of finding solutions for Syrian refugees.

Some pledges of additional resettlement and other humanitarian admission places are expected to be announced tomorrow. Given the complex international context and with Syria's conflict continuing, UNHCR said additional places will be needed over the coming months and years, in particular to address the needs of the most vulnerable refugees and to relieve pressure on Syria's neighbours.

In line with refugee situations elsewhere, UNHCR estimates that as many as 10 per cent of Syria's 4.8 million refugees fall into this category, and that well over 450,000 places will be needed before the end of 2018.

Meanwhile, in connection with tomorrow's conference, the Campaign Director of Avaaz, Alice Jay, will on Tuesday be handing over a petition to  Grandi carrying over 1.2 million signatures in support of refugees. The petition, collected since last summer calls for increased resettlement and reunification of families alongside financial support to countries on the frontline of the crisis.

Avaaz, meaning 'voice,' is a global citizens' movement which campaigns in 15 languages on six continents. A selection of photographs and messages of 'Refugees Welcome' from 23,000 Avaaz members around the world will be shared on a screen outside the conference hall tomorrow.