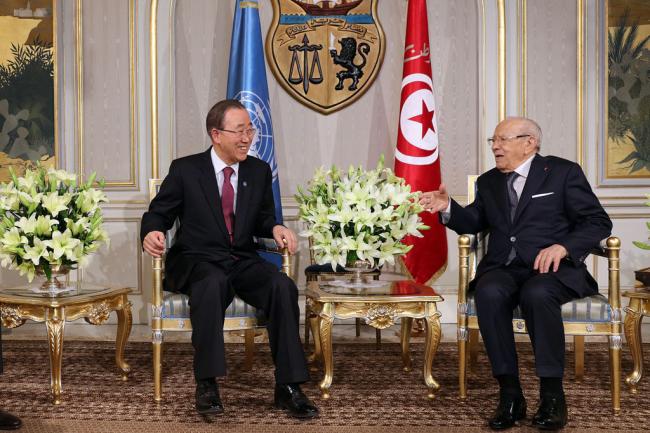 “World Bank President Kim and I are here to show our support to Tunisia, where progress towards stability and prosperity are advancing despite significant economic and security challenges,” the UN chief told reporters at a press conference in Tunis.

“We've just met with his excellency President Beji Caid Essebsi. I congratulated him for the democratic progress made in Tunisia. I also lauded his efforts to reduce social and economic inequalities. I assured him that the United Nations supports Tunisia's citizens and Government at a time when the country is in transition,” he added.

Ban noted that unemployment, especially among youth, is one of the biggest challenges affecting Tunisia. “I am impatient to hear young people tell me in person about their fears and the kind of help or support they need,” indicated the UN chief, who will be attending a national conference on employment on Tuesday, organized by the Tunisian Prime Minister.

“The United Nations I ready to continue its collaboration with the Government of Tunisia to build on programmes that creates jobs and reduce inequalities,” he stressed.

In addition to meeting the President,  Ban and  Kim are scheduled to meet Prime Minister Habib Essid, as well as the President of the Assembly of the Representatives of the People, Mohamed Ennaceur. Talks are expected to focus on concrete proposals to generate economic results that benefit the Tunisian population, especially relating to job creation and economic support.

At the press conference, the Secretary-General also expressed the global community's concern about the terrorist attacks that recently targeted Tunisia.

“The United Nations recognizes the impact of the situation in Libya on Tunisia, in particular on its economy and security. We are working towards a political solution in Libya. This remains the only way to end the crisis and to stabilize both the country and the region,” he concluded.