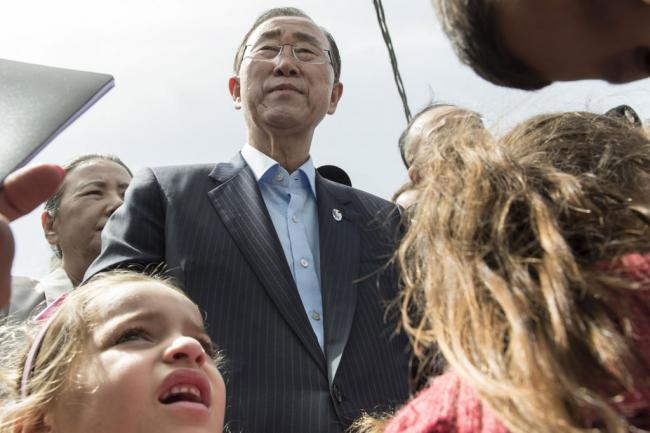 In Lebanon, UN chief and World Bank President show commitment to leaving 'no one behind'

During a visit to the Nahr El-Bared camp in northern Lebanon, which was reduced to rubble when fighting erupted in May 2007 between the radical group Fatah al Islam and the Lebanese Army, the UN chief highlighted that its reconstruction has been a top priority since beginning his tenure that same year. Many of the 31,000 Palestine refugees living there had to flee their homes.

“Now after nine years, well, I'm seeing that almost half of the reconstruction has been made, but still there are so many people waiting to return to their homes,”  Ban told reporters in Tripoli. “I just met some family members, the lady was crying, I tried to sympathize and console her, but no words can satisfy her, and no words [are enough].”

An international conference was recently convened in London by the UN, the United Kingdom, Germany, Norway and Kuwait. They were able to mobilize a significant amount of funding—more than $5.5 billion for this year.  Ban said some of these pledges will support the Nahr El-Bared camp reconstruction.

“We have about 45 per cent of funding down,” he indicated. “I am urging the international community to provide remaining funding, at least $200 million, so that these people can return. It has been too long overdue, it's been over nine years.”

He added that supporting these refugees will be one of the top priorities at the upcoming World Humanitarian Summit, taking place in Istanbul in May. “The main thing is that nobody should be left behind, everybody should work together and the people who are suffering should not be left alone,” he stressed.

On Friday, the Secretary-General also partook in an inauguration ceremony for the new Qobbeh Social Development Centre in northern Lebanon.

Speaking to the press, he said he is happy to see that the UN system and its partners are working closely with community leaders to provide people with education, vocational training, sanitation support and some psychological support.

“[The centre] also provides an opportunity when people are suffering from deprivation, lack of opportunities, no education, when they are isolated or left behind,”  Ban added. “The UN, through its 2030 Agenda for Sustainable Development, [is pursuing the same goal]: the main thing is to have everybody on board, nobody should be left behind.”

The Centre is also expected to provide support to adolescent boys and girls who are exposed to sexual gender-based violence.

Meanwhile, the heads of the World Bank Group and the Islamic Development Bank were also in attendance, showing their commitment to helping to provide quality education and job opportunities.

In his remarks, World Bank Group President Jim Yong Kim said the institution has been a long-standing partner of the Lebanese Ministry of Social Affairs, and is proud to have been supporting the National Poverty Targeting Program, which has been operating since 2009.

“We have helped scale up the program to help lessen the impact of the Syrian refugees on Lebanese families, and to help reduce tensions between the refugees and host communities,” said  Kim.

He also announced a major new $100 million initiative aimed at supporting the Government of Lebanon's plan to improve the quality of its education and to get all Lebanese and Syrian refugee children in schools by the end of the 2016-2017 school year.

The new financing was reportedly made possible thanks to a “highly unusual” decision by the Bank's Board of Directors to offer Lebanon financing terms that had been reserved only for low-income countries.

“We will not stand by when there's a danger of a lost generation of Syrian children as well as the potential for a reversal of Lebanon's achievements in education,” said  Kim. “We are here on Friday to express solidarity and support to Lebanon as it copes with the impact of the Syria crisis.”

Later at a press conference in Beirut, the UN chief said “important meetings on a range of subjects” were held with Prime Minister Salam and Speaker Berri, and the Defense Minister and Deputy Prime Minister Samir Mokbel. He also met with His Beatitude Patriarch Rai.