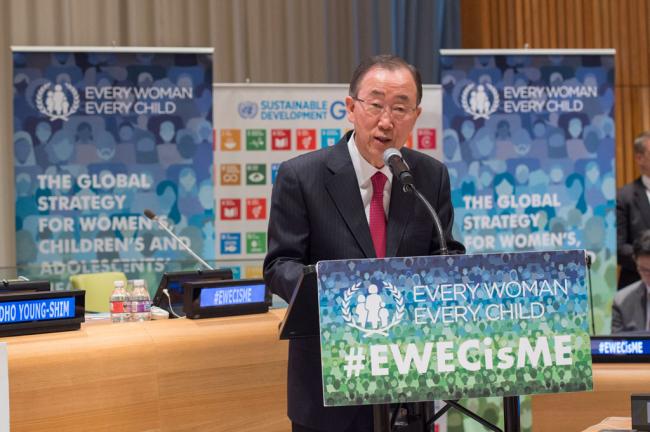 Lauded for his advocacy, Ban urges renewed pledges to improving lives of women and girls

Speaking at a side event of the 60th UN Comion on the Status of Women in New York, the Secretary-General urged everyone to either make a new commitment to the movement or renew an existing one.

More than 40 countries and 120 stakeholders have committed to more than $125 billion over the next five years to carry out the Every Woman Every Child Strategy.

The Strategy, which . Ban launched in 2010 and updated in 2015, aims to end preventable deaths among all women, children and adolescents; to greatly improve their health and well-being; and to bring about the transformative change needed to shape a more prosperous and sustainable future.

At the event, global gender equality advocates Women Deliver presented the first-ever ‘Delivering for Girls and Women’ award to . Ban in recognition of his work and achievements to improve the lives of women and girls worldwide.

Accepting the Award, . Ban said the true champions are “fighting on the frontlines for health rights everyday”.

Also speaking at on Tuesday’s event, the Executive Director of UN Women, Phumzile Mlambo-Ngcuka, said that women are crucial to a resilient health system: “Women’s health is a women’s right. Without it, health hangs in the balance.”

Ms. Mlambo-Ngcuka also spoke about the health of women and girls expanding to political, social and economic spheres.