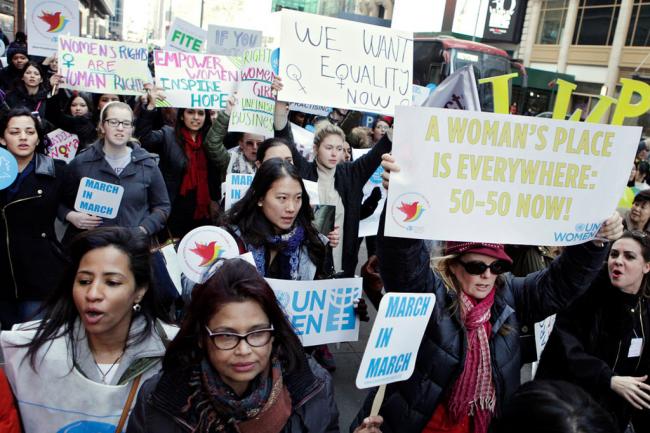 UN Commission on Status of Women opens with calls to â€˜seize the day;â€™ ensure gender equality

India Blooms News Service | | 15 Mar 2016, 08:57 am
#UN, #Womens rights, #status of women, # gender equality
New York, Mar 15 (Just Earth News/IBNS):At the opening of the 60th session of the Comion on the Status of Women, United Nations officials on Monday highlighted the progress made in achieving gender equality, while calling on the world to do much more to fight for women and girlsâ€™ rights.

“When I see all of you – from so many different countries, with so much experience and such strong commitment – I know we can achieve full equality for all women, everywhere,” UN Secretary-General Ban Ki-moon told hundreds of participants attending the opening of the two-week annual session at UN Headquarters in New York.

“As long as one woman’s human rights are violated, our struggle is not over,” he insisted, stating that the world is still full of inequalities and injustices for women and girls.

The UN chief further underlined that there are still four countries where not a single woman is in the parliament and eight countries without any women in the cabinet.

“I am not going to disclose the names but I am urging them to change this. I will be checking every day to see if there is any progress, and I will keep pushing until the world has no parliaments and no cabinets with no women,” he said, in what he described as a “personal appeal” to these nations.

Secretary-General Ban Ki-moon addresses the opening meeting of the sixtieth session of the Comion on the Status of Women (CSW). UN Photo/Loey Felipe

The priority theme for the 60th session is women’s empowerment and its link to sustainable development. Discussions by governments will focus on creating a conducive environment for gender-responsive implementation of the 2030 Agenda for Sustainable Development, which was adopted unanimously last September by all UN Member States.

Women and the 2030 Agenda on Sustainable Development

In her opening remarks, UN Women Executive Director Phumzile Mlambo-Ngcuka hailed the Comion as the largest and most critical intergovernmental forum, with diverse women’s voices that can influence the road to the 2030 Agenda, telling delegates: “In your hands is a once-in-a-lifetime opportunity to end poverty and transform gender relations irreversibly for the next generation, making the world a better place for all. Let us seize the day!”

“What was agreed in the 2030 Agenda calls on us to change the way we live, do business, grow food, value motherhood, engage and protect girls and boys, communicate, and respect and recognize the rights of those different from the mainstream in their sexual orientation or in any other way,” she continued.

Executive Director of UN Women Phumzile Mlambo-Ngcuka addresses the opening meeting of the sixtieth session of the Comion on the Status of Women (CSW). UN Photo/Loey Felipe

Ms. Mlambo-Ngcuka added that this is the moment “to capitalize on all the positive commitments,” and the moment to Step It Up for Gender Equality, referring to UN Women’s call to action, to which 98 countries have pledged.

Also speaking at the event, the President of the UN General Assembly recalled that this time last year, the global community had not yet adopted the Agenda, which can direct the world “towards a future where men and women, boys and girls, enjoy equal opportunities and full equality in a sustainable world.”

Despite noting that little has changed since September when the Agenda was adopted along with 17 newSustainable Development Goals (SDGs), Mogens Lykketoft said what has been achieved is a change in the narrative around both the importance of gender equality and what it is that gives rise to inequality.

“The 2030 Agenda embraces the fact that gender equality is an absolute precondition for the other changes we want to bring about by 2030 – tackling poverty and inequality; building peaceful and inclusive societies, fostering shared prosperity and shifting to low-carbon climate resilient economies,” he stated. “And compared with the MDGs, the SDGs go to the heart of the prejudices and structural causes of gender inequality.”

He added that during this session, the Comion has a unique opportunity to provide guidance to governments and others who are aligning their plans, core strategies and funding with the 2030 Agenda.

“It can remind governments that gender equality requires action not just on Goal 5 but right across the Agenda. And it can highlight the pitfalls, opportunities and concrete steps towards a gender-equal world by 2030,”  Lykketoft explained.

Women and the Paris Agreement on climate change

Meanwhile, speaking on behalf of the President of the Economic and Social Council (ECOSOC), Vice-President Jürg Lauber, who is also the Permanent Representative of Switzerland to the UN, said the Paris Agreement adopted by Parties to the Un Framework Convention on Climate Change (UNFCCC) was another recent achievement in the promotion of gender equality and women’s empowerment.

“In Paris, Parties committed to respect, promote and consider their respective obligations on gender equality and the empowerment of women while addressing climate change,” he highlighted, adding that ECOSOC will continue to do its part to contribute to progress for women and girls and that it has a mandated responsibility to eliminate and prevent all forms of discrimination against them.

“The Council welcomes the leadership role of the CSW and its efforts to act as a catalyst for gender mainstreaming within and beyond the ECOSOC system,”  Lauber said. “Your session over the next two weeks will be a valuable step towards addressing the medium to long-term challenges of realizing gender equality and the empowerment of women and girls by 2030.”