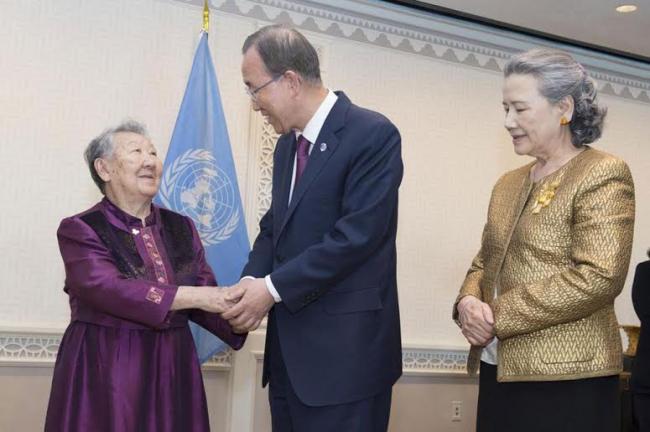 India Blooms News Service | | 12 Mar 2016, 09:17 am
#UN chief, # women victim
New York, Mar 12 (Just Earth News/IBNS):Secretary-General Ban Ki-moon on Friday stressed the need to put the victims who were drafted by Japan as so-called â€œcomfort womenâ€ during the Second World War at the centre of any resolution of the issue, following a meeting at United Nations Headquarters with one of the victims.

“I share my sympathy with Ms. Gil Won-ok about the suffering and pain that she and other victims have experienced. It is crucial that the voices of victims and survivors are heard,” Ban said.

The term ‘comfort women’ refers to hundreds of thousands of girls and women from several Asian countries abducted and forced into sexual slavery prior to and during the Second World War by the Japanese military.

In December 2015, the Governments of Japan and the Republic of Korea reached an agreement to resolve the longstanding issue of ‘comfort women’ that reportedly involves an official apology from Japan for the treatment of these women and a promised payment of $8.3 million for the victims.

“I hope that the Agreement between Japan and the Republic of Korea on 28 December 2015 will be faithfully implemented under the guidance of human rights principles,” . Ban said. “Once more, I call on all concerned parties to continue the dialogue towards a comprehensive resolution of this issue in line with human rights principles, with the victims at the centre.”

Meanwhile, a group of independent UN human rights experts on firday raised concerns about the December 2015 agreement, noting that the pact falls short of meeting the demands of the victims, who deserved “an unequivocal official apology” from Tokyo.

“We believe the agreement between Japan and South Korea falls short of meeting the demands of survivors,” said the independent experts on discrimination against women, transitional justice and torture. “An unequivocal official apology recognizing the full responsibility of the then Japanese Government and military, as well as adequate reparations, would protect and uphold the victims’ right to truth, justice and reparation.

“We are also deeply concerned that the Republic of Korea may remove a statue commemorating not only the historical issue and legacy of the ‘comfort women’ but also symbolizing the survivors’ long search for justice,” they added.

The experts stated that Japan and the Republic of Korea should understand that this issue will not be considered resolved so long as all the victims, including from other Asian countries, remain unheard, their expectations unmet and their wounds left wide open, underscoring that this is now a race against time, given the age of the survivors.

Independent experts or special rapporteurs are appointed by the Human Rights Council to examine and report back on a country situation or a specific human rights theme. The positions are honorary and the experts are not UN staff, nor are they paid for their work.