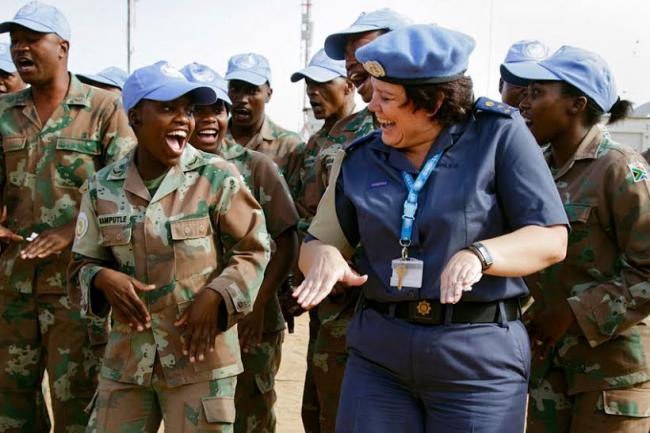 “They can put communities at ease and stand as inspiring role models for local women,” he said at the opening of the Fifth General Assembly of the Kigali International Conference on the role of security forces in combatting violence against women, held in Algiers, the capital of Algeria.

He said that the deplorable problem of law enforcement personnel being implicated in the perpetration of violence against women and girls happens “too often,” and the UN remains firmly committed to a zero-tolerance policy on sexual exploitation and abuse.

“Since I became Secretary-General almost a decade ago, I have been a staunch advocate for ending violence against women and girls,” he said, noting that in 2008, he launched the UNiTE campaign aimed at raising public awareness and increase political will and resources for preventing and ending all forms of violence against women and girls worldwide.

Today, scores of leaders and ministers, hundreds parliamentarians and millions of individuals have added their names to the action call, and their tireless efforts have put this struggle at the centre of the2030 Agenda for Sustainable Development, he said.

Stressing the need for strong laws to end violence against women, including female genital mutilation, he said that UN and African Union police in peace operations help prevent and address sexual violence in conflict, which disproportionally affects women and girls.

The UN will hold a Chiefs of Police Summit, or UN Cops, in New York this June, Ban noted, encouraging all to participate in this valuable opportunity to exchange views on how to address the pressing security and rule of law challenges and how police personnel in the field can gain skills that they can bring home to their national services.

In 2014, Algeria spent 16 per cent of the national budget in education, the second highest allocation after national defense. In 2015, the Ministry of Education’s budget reached approximately $8 million, for the benefit of 8.5 million children and students representing 22 per cent of the total population learning in more than 25,000 schools.

Amid the impressive achievements, the UN points out that there are 330,000 children under 16 years old who are out of school and 500,000 at risk of dropping out.

Ban also met with the survivors and the families of the victims of the 2007 bombing of the UN House in Algiers as well as UN staff before he left for Germany.

Upon receiving the German Media Award while in Baden-Baden, Ban highlighted the plight of refugees fleeing war and persecution and arriving in great numbers in Germany and other European nations.

While lauding the generosity shown to the refugees in many places across Germany and Europe, he noted that the border restrictions being put in place by Governments along the Balkan land route are not a solution.

“I call on all countries to keep their borders open, to expand legal pathways to asylum, and act in a spirit of solidarity,” said the Secretary-General, while adding that there is a need for greater sharing of responsibility among all States, not just those in Europe.

On Tuesday, he will be in Berlin, where he will meet with German Chancellor Angela Merkel and other officials.