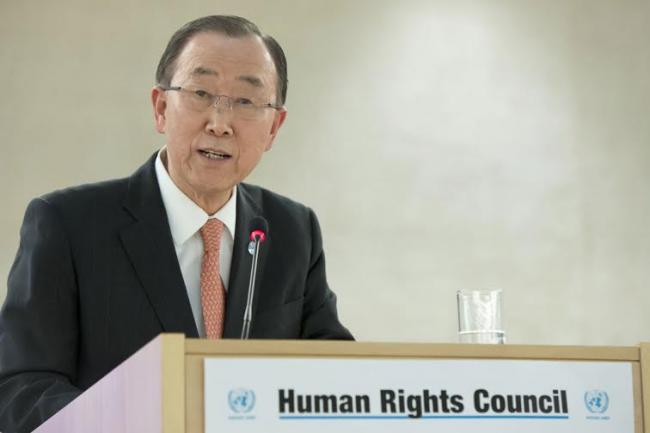 India Blooms News Service | | 01 Mar 2016, 09:49 am
#Ban Ki moon, # UN , # Human Rights Council
New York, Mar 1 (Just Earth News/IBNS): At the opening of the 31st session of the United Nations Human Rights Council, senior UN officials emphasized the powerful link between the 2030 Agenda for Sustainable Development and the right to development, highlighting that people on the front lines of armed conflict and humanitarian need are hoping the Organization can help ease their suffering.

“Sustainable development is impossible without peace and security. Human rights are the very foundation of our common humanity. These fundamental links have led the United Nations to undertake wide-ranging advocacy and defence of human rights,” he underlined.

Ban stressed that the agreement last December between Japan and the Republic of Korea on the so-called “comfort women” subjected to tremendous suffering during the Second World War highlights the need to address the pain of the victims, no matter how many years have passed.

“I hope the faithful implementation of the agreement, guided by the recommendations of UN Human Rights mechanisms, will help such wounds to be healed,” he stated, adding that “at this time of multiple conflicts and skyrocketing humanitarian need,” the global community must do more to prevent crises and protect people.

“This will be one of the main calls to action at the first-ever World Humanitarian Summit, in the history of the United Nations, in Istanbul on May 23 and 24 – an opportunity to come together with solutions and partnerships to uphold human dignity and our common humanity,”  Ban stressed.

Insisting that the 2030 Agenda is a major step forward for human rights, the UN chief said its commitment is to “reach those who are farthest behind,” meaning the most vulnerable people – the victims of inequality and injustice. He explained that many of these are people trapped in situations of conflict, affected by climate change, and who are migrants, refugees, displaced and stateless.

“Building higher walls and creating stricter asylum regimes does nothing to address the reasons for mass movements of people, which are often rooted in festering development and governance challenges,” he declared.

Just last week, the Secretary-General was in Africa visiting some of the front lines of armed conflict and humanitarian need. “What I saw most of all in the faces of these people was their yearning for freedom and prosperity and justice. They hope and expect the United Nations to help ease their suffering and help them build a better future,” he reported.

Concluding his remarks, he said he also has hope, “thanks to an inspiring new development Agenda, the enduring power of human rights and the best of the human spirit.”

“Sustainable Development Goals (SDGs) seek to realize the human rights of all,” he underlined. “The onus is now on implementation, to deliver on the Agenda's promises of transformative change. We need to take action to ensure that human rights principles, including the right to development, are at the core of this vital new drive for human progress and well-being.”

Zeid insisted that the global community cannot fix problems that cannot be seen. “Only if data is accurately gathered, and disaggregated according to all grounds for discrimination prohibited under human rights law, will we be able to gauge our progress in reaching the most vulnerable and excluded,” he said.

The UN rights chief highlighted that the Agenda's resonance with the right to development is unmistakeable. “And as a detailed programme for action, the Agenda – our 'declaration of interdependence,' as the Secretary-General has said – offers the people of the world enormous hope,” he concluded.

Along with his address to the Council, the Secretary-General also appointed on Monday the West-Eastern Divan Orchestra as United Nations Global Advocate for Cultural Understanding.

Speaking to reporters with the co-founder and UN Messenger of Peace (MOP), Maestro Daniel Barenboim,  Ban said that Orchestra's every performance is a testimony to the power of music to break down barriers, to promote cultural understanding and to build bridges between communities.

He added that Maestro Barenboim and the Orchestra have agreed to perform at the World Humanitarian Summit in Turkey which, as you know, will take place in May.