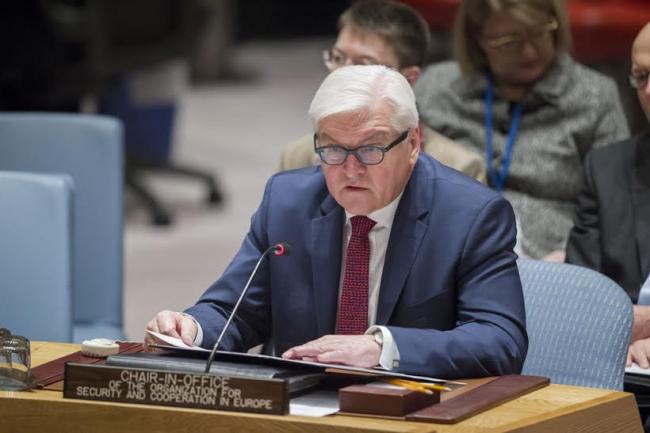 India Blooms News Service | | 01 Mar 2016, 09:26 am
#UN and OSCE, #Security Council , # UN
New York, Mar 1 (Just Earth News/IBNS): The United Nations and the Organization for Security and Cooperation in Europe (OSCE) continue to give the international community the best tools to prevent disorder and shape a future of a â€œrules-based international order,â€ the Security Council on Monday heard from the chairperson of the world's largest regional arrangement under the UN Charter.

“I am convinced that the principles to which we have all agreed in the UN and the OSCE – such as territorial integrity and sovereign equality of nations – must still form the bedrock of how we live together as nations,” Frank-Walter Steinmeier, the Chairperson-in-Office of the OSCE and Minister for Foreign Affairs of Germany, told the 15-member Council.

“These commitments still form the basis for overcoming divisions - provided that all states muster the necessary political will,” he added.

Steinmeier stressed that the world needs strong multilateral organizations to help safeguard and implement these principles, to give the tools for conflict resolution, and to provide opportunities “for debate to overcome our differences.” He said nobody can deny that on Monday's challenges are “enormous.”

“Violent crises and conflicts surround us – even on our own continent in Europe,” he underlined. “Russian aggression in Ukraine has brought the devastation of war right back to the heart of Europe - violating central provisions of international law, the Helsinki Final Act and later OSCE commitments.”

At the same time, he highlighted that violence has spikes in regions of the Middle East and North Africa, “with oppression, terror, religious radicalism and regional rivalries having led to immeasurable human suffering, especially in Syria.”

“The brutal conflicts in the Middle East have also reached the European continent. Hundreds of thousands of people have been forced to flee their homes and are seeking shelter in Europe – many of them in Germany,” the Foreign Minister added.

Continuing on the situation in Ukraine,  Steinmeier said development show how indispensable the OSCE is when it comes to "uniting our strength to maintain international peace and security", as the UN Charter says.

“Without the OSCE and particularly the courageous men and women of the Special Monitoring Mission, we would not have made the progress we have seen on military de-escalation and withdrawal of weapons,” he emphasized, adding that the only way towards a sustainable political solution is by implementing the Minsk agreement.

The chairperson also spoke about the issue “frozen” or “protracted conflicts,” as well as the Nagorno-Karabakh conflict and the need to engage in a broader dialogue on European security.

“I believe the pressing issue of migration should figure more prominently on our agenda. I welcome the UN Secretary General's initiative to organize a global summit on migration in September. The OSCE has a lot of expertise in this field: from human rights standards and best practices in labour migration to combatting human trafficking,” he said.

“In Germany, people's overwhelming readiness to help arriving refugees has recently been overshadowed by xenophobic assaults. These are despicable acts that we must not and will not tolerate!” he declared.

Finally, the Minister stressed he hopes the principles of the OSCE can provide a “glimmer of hope” to other regions, particularly in the Middle East.

“Of course, you can't transfer a security architecture to another region. But perhaps our experiences can highlight useful principles and processes. And maybe they can encourage the parties in the Middle East to live up to their responsibility and explore new paths to political settlements,” he told the Council, recalling that the OSCE's motto for 2016 is “renewing dialogue, rebuilding trust, restoring security.”