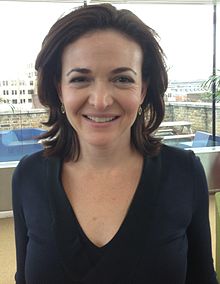 Posting the video, Sandberg wrote on her Facebook wall, "This is one of the most powerful videos I have ever seen – showing how stereotypes hurt all of us and are passed from generation to generation. When little girls and boys play house they model their parents' behavior; this doesn’t just impact their childhood games, it shapes their long-term dreams."

The advertisement speaks about sharing the load between each members of the family to cut down on the stereotypes imposed on females by the society.

Sandberg also thanked the parent company for the initiative.

She wrote, "In this â€ª#‎SharetheLoadâ€¬ campaign, Ariel India, P&G, and BBDO Worldwideshow how fathers and husbands can take small steps (like doing laundry) to create more equal homes. They won a â€ª#‎GlassLionâ€¬ at the 2015 Cannes Lions International Festival of Creativity for earlier work on this campaign. The real win is the way they are changing stereotypes and showing that a more equal world would be a better world for all of us."

She also urged the male members of the family to share the load.

"Dads, #ShareTheLoad and â€ª#‎LeanInTogetherâ€¬ for equality," she said.