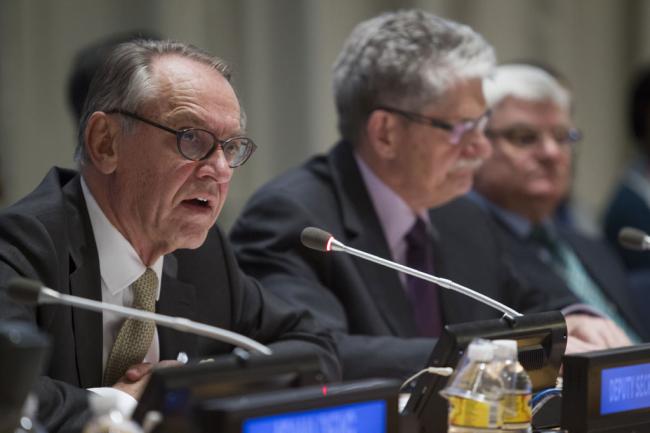 Addressing a UN General Assembly panel discussion, titled “from commitment to implementation: ten years of the responsibility to protect,” Deputy Secretary-General Jan Eliasson recalled that Member States back then identified the need to bridge the gap between legal commitments to protect populations from genocide and crimes against humanity and the continuing failures of protection on the ground.

As President of the General Assembly in 2005, Eliasson said he had witnessed the birth of the principle of responsibility to protect, or 'R2P, as it is often called, which was not designed to be a comfortable rhetorical restatement of common values, but a call to action. At the beginning of its second decade, the international community must unequivocally reaffirm the principle, he urged.

The last decade has seen mixed results, he noted. Developments in Cote d'Ivoire, Guinea and Kenya count as successes. But the global response to the Syrian crisis has been a catastrophic failure. And the situation in South Sudan is deeply troubling. Other crisis areas are still the subject of debate.

“Impunity is pervasive, and accountability is distant,” he said, noting that too many Member States are failing to live up to fundamental rules of international humanitarian and human rights law. And too many have yet to become Parties to the international conventions which set out the framework for preventing and punishing the crimes identified by the principle of the responsibility to protect.

On the positive note, the responsibility to protect has helped to generate a growing political understanding among Member States on how to prevent and respond to atrocity crimes.

Through successive General Assembly dialogues since 2009, Governments have agreed that prevention is at the core of the UN agenda. The responsibility to protect has also led to the development of new political commitment and new institutional capacities.

The Global R2P Focal Point Network, the Regional Committee at the International Conference of the Great Lakes Region, the Latin American Network on Genocide and Mass Atrocity Prevention, and the Global Action against Mass Atrocity Crimes all aim to prevent a downward spiral towards systematic violence. They help identify ways to assist States to better protect their populations.

Eliasson outlined three priorities going forward. First is prevention, he said, stressing the need to act early instead of waiting for disaster to occur. The Human Rights Up Front Initiative is an important step in this direction. Second, when crimes against humanity occur, the international community must respond faster and more decisively. Third, a stronger emphasis must be placed on peacebuilding – financially and politically, he said, noting how South Sudan's gains have been reversed.

This year, Special Advisers Adama Dieng and Jennifer Welsh are launching a research project to draw conclusions about the combination of tools likely to make the most difference in protecting populations at risk, Mr Eliasson said. The results of this research can guide the development and use of the different instruments at disposal.

“We must work collectively to make the protection from genocide, war crimes, ethnic cleansing and crimes against humanity a living reality,” he concluded.