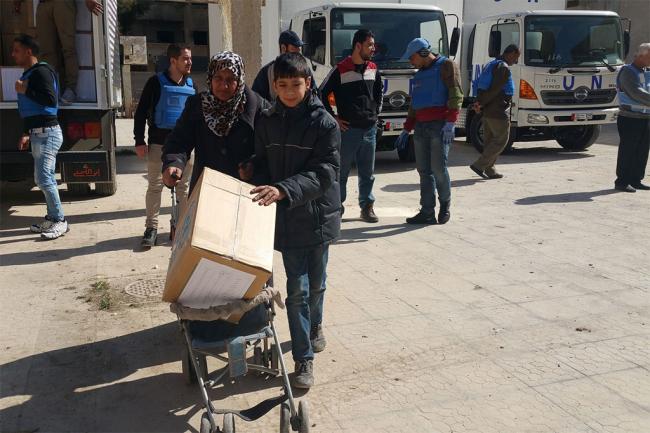 Speaking to the press in Geneva, Staffan de Mistura, UN Special Envoy for Syria, said that today's humanitarian task force meeting was “useful and effective,” reporting that humanitarian aid on nearly 200 trucks had reached to 110,000 people in besieged areas and, yesterday, a trial run began for air drops aimed at reaching another 200,000 people in need. However, he stressed that “nothing is enough and much more need to be done.”

Tomorrow, 26 February, is a “crucial day,” De Mistura said, noting that, following a midday deadline for the acceptance of the cessation of hostilities agreement, a ceasefire task force will meet to discuss the modalities. He will then brief the UN Security Council via video link and will speak to the press to announce a date for the resumption of intra-Syrian talks aimed at ending five years of bloody warfare there.

If the cessation of hostilities takes hold, humanitarian assistance would reach more people not just in the besieged areas but everywhere in Syria, he said.

The mediator suspended the talks earlier this month following differences between Government and opposition delegations on the priority of humanitarian issues. Then, top-level diplomats met in Munich and agreed on “two deliverables” – one on unimpeded humanitarian access to the besieged areas and the other on achieving the cessation of hostilities.

“Both deliverables are moving in the right direction,” De Mistura said.

The task forces were established as part of the International Syria Support Group (ISSG), which consists of the Arab League, the European Union, the United Nations, and 17 countries, including the United States and Russia.

Special Advisor Jan Egeland pointed out that there is still an “active conflict in several areas that is preventing access.” Noting that a convoy took 48 hours to complete a delivery of humanitarian supplies to Madimayet, which is within an hour drive from Damascus, he said “the procedures are too cumbersome, and we are stopped at too many roadblocks.”

On the trial airdrops by the World Food Programme (WFP), Egeland said Deir ez-Zor “is the only location we cannot, as humanitarians, reach by a negotiated land access.”

He said “there were two problems; pallets were drifting with their parachutes, so that some missed their targets, and other of the pallets, the parachutes did not open and the food were destroyed.”

Egeland said WFP is planning to continue the trial period for the next three months, noting that “the best humanitarian logisticians in the world are working on how to make this lifeline to 200,000 people in Deir Ezzor, mostly women and children, work.” He added that “what I hope is that we continue this momentum, because in a way we have had diplomatic support the last two weeks in getting access than we probably had through 2015. We need to have sustained engagement.”