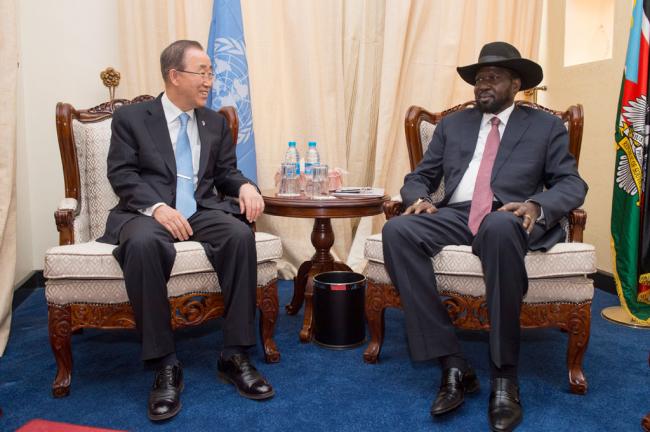 During his meeting with President Kiir, the UN chief emphasized that implementing the peace agreement reached this past August must be a matter of priority for the Government of South Sudan, including the urgent formation of a Transitional Government of National Unity with opposition leader and newly appointed First Vice President Machar.

According to a statement issued by Ban’s office, in this regard, he “welcomed the Government’s commitment to implement transitional security arrangements for Juba in accordance with a proposal put forth earlier in the week by the Joint Monitoring and Evaluation Commission.”

Ban also urged the President to work with Machar, upon his return, to “rebuild mutual trust and confidence from the people and the international community to set the country on a path to stability,” the statement said.

The Secretary-General also strongly condemned the outbreak of violence at the UN protection of civilians site in Malakal last week, and called on the Government to conduct a full investigation and bring perpetrators to account.

Ban reiterated the UN’s commitment to the protection of civilians, both within established UN protection sites and elsewhere in the country, and urged the Government to allow “unfettered access” to UN personnel and humanitarian partners, the statement said.

At a press conference earlier today, the UN chief highlighted that he was concluding his visit to Juba, the South Sudanese capital, at a critical time, and reiterated the UN’s commitment to the peace process and the future of South Sudan.

“Put peace above politics. Pursue compromise. Overcome obstacles. Establish the Transitional Government of National Unity. And do not delay it,” Ban stressed to the leaders of South Sudan.

Ban also said he was “profoundly moved” by his visit earlier with students and others affected by the conflict at a protection of civilians site run by the UN Mission in South Sudan (UNMISS).

“I saw in the faces of the people of this country all that the flag represented. The pride. The spirit. The hope. And, yet, tragically, that hope has been betrayed,” he emphasized.

Reaffirming that attacks against civilians, peacekeepers and UN premises – such as in Malakal – violate international humanitarian law and must stop, the UN chief noted that the protection camps are not a long-term solution.

“As important as it is, humanitarian action can never be a substitute for political solutions,” he said. “The Government of South Sudan must step up to its responsibility and protect its population.”

In particular, Ban urged all parties to remove restrictions on the freedom of movement of the UN and humanitarian actors and ensure access to people in need of protection, and life-saving aid.

As part of that goal, the UN chief announced earlier that he had allocated $21 million from the Central Emergency Response Fund (CERF) for the people of South Sudan.

“These much-needed resources will provide protection and relief when it is needed most,” Ban said in a separate statement. “But this action is far from being enough,” he stressed.

Noting that South Sudan’s Humanitarian Response Plan is only three per cent funded, Ban urged the international community to show its commitment to the country’s people.

“I hope that these funds will catalyze much more. Time lost means lives lost,” the Secretary-General said.

The UN chief also said that over the past week, he had visited a number of places – Burundi and the Democratic of the Congo, in addition to South Sudan – that were all “tragically suffering from the impact of protracted conflict.”

“What I have seen underscores the need for the international community to do much more – far, far much more – to prevent and end conflict; uphold international norms and accountability; reduce displacement; and invest to enhance resilience and leave no one behind,” Ban said.

Those are all major themes of the World Humanitarian Summit to be held in Istanbul on 23 and 24 May, the Secretary-General said.

“I have urged world leaders urge leaders to reduce, at least by 50 per cent, of displaced persons, by 2030. I urge leaders from the region and around the globe to come in full force to re-imagine how the world deals with the crises and act on a true Agenda for Humanity,” Ban concluded, referring to his report, One Humanity: Shared responsibility.