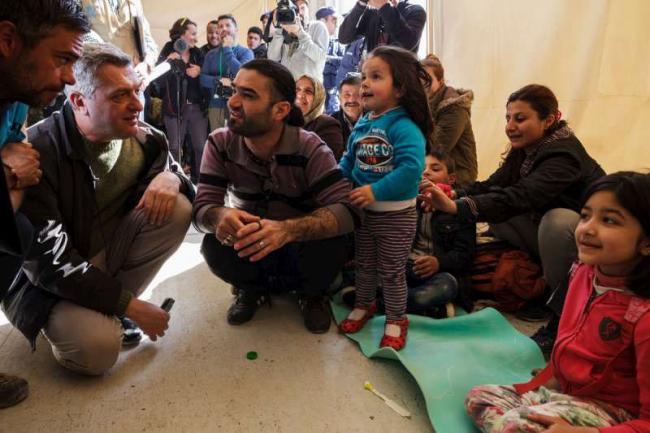 India Blooms News Service | | 25 Feb 2016, 09:06 am
#UN, # United Nations, # Balkans border
New York, Feb 25 (Just Earth News/IBNS) Europe is backing into an even greater refugee crisis by tightening border restrictions on the hundreds of thousands fleeing conflicts elsewhere, the head of the United Nations refugee agency has said on a visit to the island of Lesvos in Greece.

UN High Commissioner for Refugees Filippo Grandi, who took office on 1 January, visited the port and the refugees and migrants registration centres there on Tuesday, a day that at least 1,800 people made the dangerous crossing by rubber dinghy from Turkey.

“I am very worried about the news we are getting about the increasing closures of the European borders along the Balkans route,” Grandi said, adding that the situation will create further chaos and increase the burden on Greece, which is already shouldering a big responsibility managing these people.

He emphasized the need to further promote the option of relocation, noting that while a system for distribution was in place, far too few places – 1,200 – are being offered by European Union countries and too few refugees are agreeing to take part in the scheme. The scheme would significantly reduce the numbers moving to Austria, Germany and Sweden and ease the pressure on Greece, he added.

‘Europe has not shown much solidarity’

Last year, more than 500,000 refugees first touched European soil on Lesvos. And so far this year, more than 50,000 have come to the island. Grandi noted that “Europe has not shown much solidarity, but here we see the best face of Europe” with the significant efforts made by the local community, local authorities, volunteers and non-governmental organizations.

He also denounced what he called “the tendency to classify people along the route by nationality.” Syrians and Iraqis can go through while others like Afghans, Somalis and Palestinians are blocked, he said.

Grandi spelled out ambitions for a conference by the Office of the UN High Commissioner for Refugees (UNHCR) to be held on March 30 to promote legal avenues for Syrian refugees to reduce their dependence on criminal smuggler networks and regularize the flow. He said both Europe and the world must commit to taking many more Syrians, to relieve the burden on the principal refugee-hosting countries – Turkey, Lebanon and Jordan.

“But we’re not going to tell them, take a few [hundred] or a few [thousand] as is the case now. We’re going to tell them to take hundreds of thousands. In fact our hope would be 10 per cent of the whole Syrian refugee population, almost half a million people.”

Grandi heard the stories of several refugees at the port and in the reception centre. Hallal said he fled his bombed home in Hamaa in Syria a year and a half ago. He spent $4,000 to make the dangerous crossing to Lesvos. His goal is to provide security and an education for his seven children. “I hope, God willing, the war will end in Syria, and we can return,” he said. “My country is good, my country is precious to me. But because of my children, I was scared and I had to leave my country.”

In late afternoon, the High Commissioner spent a quiet hour in a quiet corner, which bears testimony to the tragedy that exile can bring. Grandi climbed to the top of St. Pantelaimonas cemetery where more than 150 were buried. Most of them drowned, many were children, whose short lives were marked by soft toys and simple words “unknown little one.”