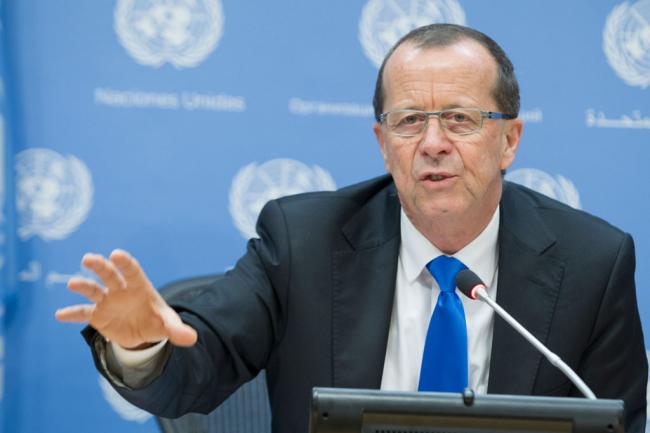 India Blooms News Service | | 25 Feb 2016, 09:01 am
#UN envoy, # Libya
New York, Feb 25 (Just Earth News/IBNS) The United Nations envoy for Libya on Wednesday called for an immediate step to formalize the parliamentary approval of a national unity Government, as its launch is vital to peace and stability in this post-conflict country.

Martin Kobler, the Secretary-General’s Special Representative and Head of the UN Support Mission in Libya (UNSMIL), welcomed the statement signed by the majority members of the House of Representatives, in which they declared their approval of the Government of National Accord (GNA) proposed by the Presidency Council after months-long UN-facilitated talks.

The UN envoy said that this development demonstrated the strong determination of the Libyan people and the overwhelming support by the majority of House members for the proposed new Government. He called on the House leadership to take immediate steps to formalise this endorsement.

Kobler expressed concerns about many reports of intimidation and threats against House members. “This is unacceptable,” he said, stressing that parliamentarians have to decide freely, and the House leadership has the responsibility to ensure that the parliamentary process is unhindered and conducted in an environment free from threats or intimidation, according to democratic principles.

UNSMIL was established in 2011 by the UN Security Council at the request of the Libyan authorities following six months of armed conflict to support the country’s new transitional authorities in their post-conflict efforts.