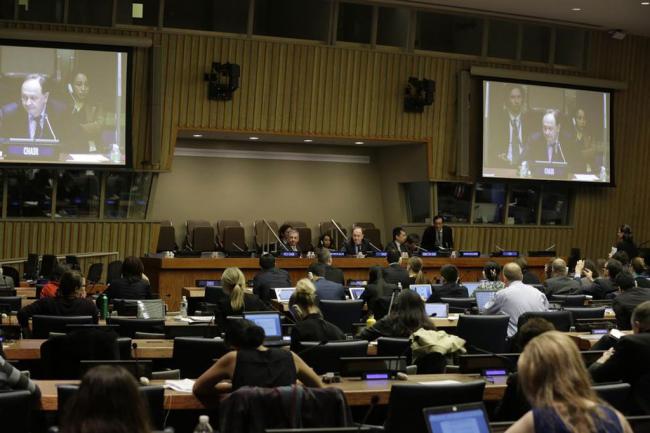 India Blooms News Service | | 18 Dec 2015, 10:03 am
#Internet, # social media, # terrorism, # ISIL, # ISIS
New York, Dec 18 (Just Earth News/IBNS) Stressing the need for States to work with the private sector to devise ways to prevent terrorists from exploiting the Internet while respecting human rights, the top United Nations political official on Thursday said curtailing the influence of terrorists and violent extremist groups must not come at the expense of curbing legitimate political discourse on the Internet or social media.

“Today's topic…brings us to the fine line between benevolent and malevolent: freedoms and human rights apply to anyone anywhere, but only as long as they do not call into question the enjoyment of these freedoms and human rights by others,” Jeffrey Feltman, the Under-Secretary-General for Political Affairs, told a special meeting of the UN Counter-Terrorism Committee.

“It is precisely [the] exploitation by terrorists and violent extremists that can easily result in us restricting human rights and fundamental freedoms,” he continued, acknowledging that while it is now “a given that ICT is part of the equation in our effort to achieve a more sustainable, equitable and connected world,” it is this free flow of information that has led the Islamic Stat of Iraq and the Levant (ISIL) and other extremist groups to successfully use the Internet to broadcast their ideology and to recruit foreign terrorist fighters.

Indeed, ISIL, Feltman continued, has raised the exploitation of the Internet and social media to a new level, luring over 30,000 foreign terrorist fighters from over 100 countries to join the conflicts in Syria and Iraq or inciting individuals to commit terrorist acts in their home countries. Thus, local and regional conflicts have unprecedented global repercussions.

The UN and Member States – working closely with the private sector and civil society – must act together to prevent and counter the exploitation of ICT resources and also develop their own effective strategic communications tools to expose the hypocrisy of terrorist and violent extremist groups as well as inspire and instil in potential recruits tangible alternatives, he underscored.

“The United Nations sees its role in support of Member States both as convener and provider of capacity-building,” stated Feltman, going to spotlight three core areas of activities: UN coherence; innovative dialogue with new partners; and a global framework.

Specifically on that issue, he announced that Secretary-General Ban Ki-moon will release, in the coming days, a Plan of Action to Prevent Violent Extremism, which will make strategic recommendations to address the drivers of violent extremism and to broaden our approach beyond ongoing, essential security-based counter-terrorism measures.

“It will call for greater attention to strategic communications at all levels. It will put an emphasis on youth, focusing on the interface between youth and social media, putting young people at the centre of our efforts to address the misuse of the internet,” added Feltman.

To complement Member States' efforts, he said that the UN Centre for Counter-Terrorism is exploring opportunities for capacity-building programmes to assist them in designing strategic communications that respond to the specific challenges posed by violent extremist communications.

As for what he called the even broader UN-provided framework, Feltman stressed that the UN Charter and international human rights law form the basis for effective preventive and counter-terrorism measures. “We have to end impunity and make sure that terrorists and their supporters are held accountable for incitement by having in place the appropriate legislative provisions to bring perpetrators to justice,” he said.

Today’s meeting coincides with the closing of the General Assembly’s High-Level meeting on the outcomes of the World Summit on the Information Society, and as the Security Council has convened a meeting of finance ministers from among its member States on ways to disrupt terrorist financing.