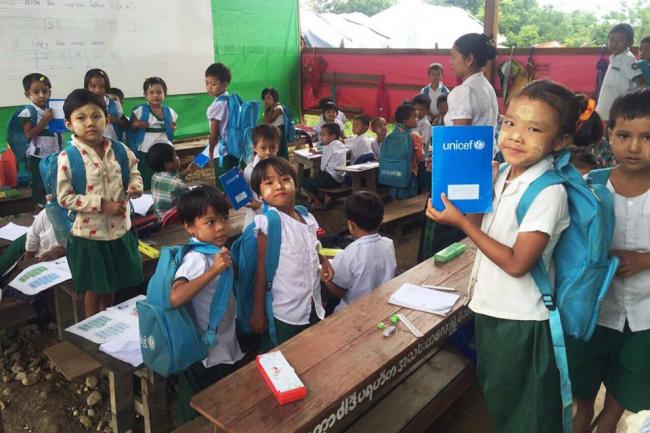 India Blooms News Service | | 22 Oct 2015, 12:07 pm
#UNICEF, # Myanmar, # Children
New York, Oct 22 (IBNS): In the light of upcoming elections in Myanmar and amid reports of rising religious intolerance, the United Nations Childrenâ€™s Fund (UNICEF) on Tuesday welcomed a joint statement by the leaders of four main religious groups in the country calling for tolerance and respect of religious freedom as essential conditions for every child to grow and develop to their full potential.

“Religious leaders play an important role in advocating for children’s rights and earn public trust among their respective faiths,” explained Bertrand Bainvel, UNICEF Representative to Myanmar, in a press statement.

According to UNICEF, the call comes after reports of endorsing religious divides have been attempted for political gains in the 2015 elections in Myanmar.

The statement was released by Interfaith for Children, an inter-faith group that has insisted on putting children’s needs and rights at the centre of the elections.

UNICEF also said that the joint declaration by Buddhist, Christian, Hindu and Muslim leaders of the country reminded the public and politicians that children represent around one third of the country’s population.

The religious heads urged the public and politicians to put children and harmony first and that the efforts made for them now ‘will have a marked effect on their future.’

“Much of Myanmar’s future depends on what the Myanmar society will be able to do for children now. The coming elections are the perfect moment not only to commit to new policies, goals and resources for children, but also to emphasise the values of peace and tolerance which are so essential to their harmonious development", added Bainvel.

The UN agency also added that the religious groups have urged parents and guardians of any faith to bring peace, harmony, understanding and cooperation without discrimination towards any race, religion or culture.

UNICEF added that this is the first statement issued by Interfaith for Children since April 2014, when the religious leaders from four different faiths came together for the first time in Myanmar’s history in support of child protection, survival and education.

Lastly, the agency reaffirmed its support of the Interfaith for Children and Ratana Metta Organizations (RMO) and reiterated its commitment to the realisation of children’s rights and a tolerant society respectful of religious and ethnic diversity.