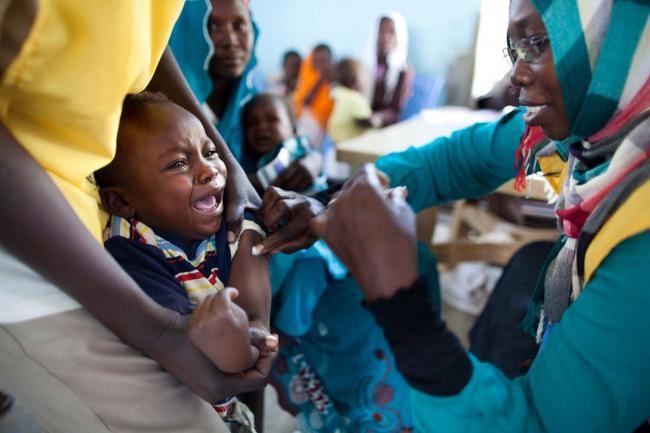 UNICEF calls for a joint vaccination plan in Sudan

Speaking at a press briefing in Geneva, UNICEF Spokesperson Christopher Boulierac said the agency had begun the vaccination campaign in January 2015 when the first outbreaks had been reported. UNICEF, he continued, is urging all parties to the conflict to commit to the joint vaccination operational plan that has been in place over the last three years.

Boulierac said that access for humanitarian aid has not been granted to the three inaccessible areas of the Nuba Mountains, the Blue Nile and the Jebel Mara of North Darfur, and as a result, children there had not been vaccinated.

Currently, he added, UNICEF is “fully operational,” and he hoped the call for a cessation of hostilities would “translate into vaccination of the 165,000 children under the age of five in those inaccessible areas.”

Sudan's children, said Boulierac, continue to be affected by outbreaks of diseases including measles, dengue fever and diarrhoea. He added that it is children that continue to bear the greatest burden as the “double victims” of conflict and chronic under development.

In additional, some two million children were severely and acutely malnourished, and in all 18 states of Sudan, malnutrition rates were over the emergency threshold of 15 per cent.

Boulierac also noted that the UNICEF Sudan humanitarian appeal for 2015 was 72 per cent underfunded. Total funding requirements in 2015 are approximately $ 117 million, of which almost $ 33 million has been received.