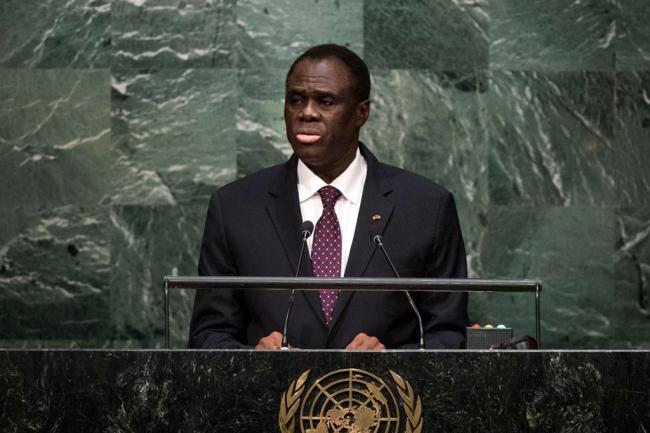 Burkina Faso's transition won't be stalled by those rowing against current of history: President

India Blooms News Service | | 03 Oct 2015, 08:51 am
#Burkina Faso, # President
New York, Oct 3 (IBNS): Thanking the international community for strongly condemning the recent coup dâ€™Ã©tat in Burkina Faso, and for backing the transition he is leading, President Michel Kafando on Friday called upon the United Nations General Assembly to continue supporting the county's efforts "to anchor true democracy," through to the holding of free and transparent elections.

“The transition I am leading is the result of a popular uprising in October 2014. It is a response to the arbitrariness, nepotism and injustice of an anti-democratic regime,” said Kafando, telling delegations at the Assembly’s annual debate that he had come to extol the virtues of true liberty.

“As I was deprived of this for a time, I know how precious it is,” he continued, explaining that just two weeks ago, he was jailed in the wake of a military uprising driven by “praetorians of another time who were rowing against the current of history and trying to seize democracy to serve their sordid ambitions.”

“It is thanks to you, defenders of [liberty and democracy], that I speak freely today,” he said, denouncing the “heinous” 16 September coup carried out by military officers whom, he said, had been “bought by vengeful politicians” just ahead of election campaigning.

President Kafando said the nation’s response to the coup d’état had been spontaneous. The population tried to derail the coup, which had regrettably led to a tragic loss of life and numerous injuries. Burkina Faso, especially the youth, had shown an unprecedented level of patriotism.

In addition, the international community had immediately come forward to strongly condemn the coup and express support for the transition. He thanked all countries and international organizations, civil society groups and journalists that had “come together so quickly to frustrate the coup” and promote the country’s return to normalcy.

“We ask you to continue to support our efforts to anchor true democracy in Burkina Faso through the holding of free and transparent elections, which will be organized shortly.”

Turning to other issues on the global agenda, Kafandao urged action to address the long-lingering after effects of the economic crisis and to redouble efforts to wipe out poverty. As for the Millennium Development Goals (MDGs), he said that while there had been significant progress on those targets, much remained to be done.

“We must step up our efforts and take robust action to improve the living conditions of our populations,” he declared, calling for ambitions actions towards, among others, implementing the Addis Ababa Action Plan on development financing.

This, he said, would lay the groundwork to press ahead with achievement of the new Sustainable Development Goals and Agenda 2030.