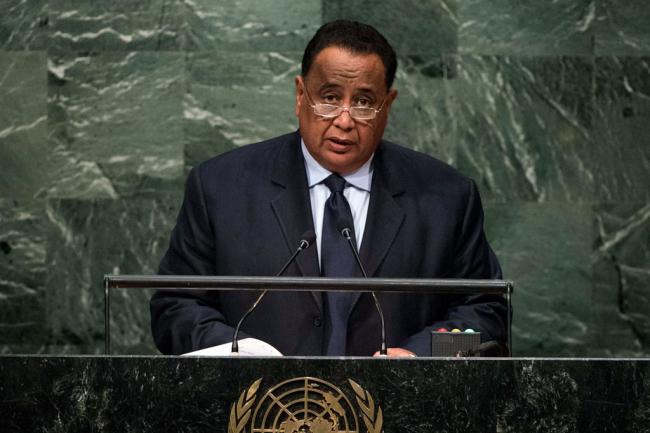 India Blooms News Service | | 03 Oct 2015, 08:28 am
#Sudan, # UN, # General Assembly
New York, Oct 3 (IBNS): The Minister of Foreign Affairs of Sudan told the UN General Assembly on Thursday that despite his country still being subjected to unilateral economic sanctions "which hinder the realization of its ambitions," it is determined to ensure that the new Sustainable Development Goals (SDGs) complement the process of peace, stability and growth.

“We strongly support with appreciation, from this podium, the rejection of coercive and unilateral sanctions imposed on certain countries,” Ibrahim Ahmed Ghandour declaredduring the fifth day of the annual general debate.

“The Sudan had great expectations, in the wake of signing and implementing the Comprehensive Peace Agreement, in 2005, and signing the Doha Peace Agreement, in 2011, that the international community would give special consideration to its overarching concerns and economic problems, especially as regards alleviating the debt burden which is seriously encumbering the economy,” he said.

But to the country’s dismay, all it received for achieve peace and stability and for all the sacrifices it had made, “was endless pressure, sanctions, boycotts and unilateral and coercive measures, which are politically motivate and lack all legal justification whatsoever.”

Ghandour noted that despite these difficulties, Sudan made distinct efforts towards achieving the Millennium Development Goals (MDGs), with “reasonable success” in the field of educational services, where enrolment rates have greatly increased as well as the proportion of female students.

“People have, for the first time in the history of modern Sudan, elected a President, Members of Parliament and members of legislative bodies throughout the country,” the Minister noted regarding Sudan’s internal political affairs. He added that women held 30 per cent of parliamentary seats.

Meanwhile, he underlined that Sudan has been an active partner in international efforts to combat terrorism, noting that the country has “come a long way in ensuring that our laws and legislations are in full compliance with international law and instruments.”

Finally, he called for the implementation of a structural reform process of the UN and the Security Council, “in conformity with the principle of fair and equitable representation of all countries.”