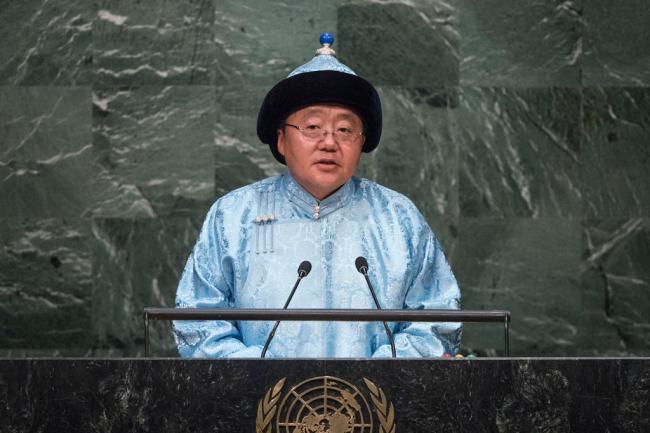 He stressed that the only way to rid the world of conflicts and other global issues is for world leaders to diligently work together to ensure that all the primary objectives of the UN are met.

“The only way to bring peace and stability is through a system of [norms], laws and institutions that every country agrees to abide by. If the UN fails to adopt [such a system], we all fail,” said President Elbegdorj.

He added, “When we face global challenges, we must admit one thing: no one country – big or small – can address them on its own. Therefore, the coordinated actions of all players and countries are needed,” he added.

He also highlighted the important role the UN has played over the past seven decades in maintaining world peace, and he admitted that in order to uphold the Organization’s primary purposes, immediate and significant institutional changes must be made.

“We all know there are sound critiques of the UN. If our United Nations is to survive in the new reality, we must embrace substantive change. We need reforms to build a just common home. If we delay action, change will become more painful and challenging,” he warned.

The President stressed that much of the global economy and manpower are spent on war machines and the propagation of violence, rather than on eradicating resolvable global issues.

“We are the first ones in history who have the potential, technology, and resources to resolve the world’s problems. When I observe a giant military exhibit, I wonder ‘What a huge amount of money, human ingenuity and time are being spent on war machines and weapons of mass destruction.’ With a fraction of the money and technology we spend for ‘the masculine war show,’ we could solve many of today’s troubling issues,” he said.

He also appealed to the governments to adopt national laws and policies to implement the Sustainable Development Goals, adopted recently by the Assembly.

“Our historic 2030 Agenda is comprehensive and sustainable. We agreed on urgent targets, on a broad range of economic and social challenges, and on environmental emergencies,” he emphasized.

“To achieve them, the family of nations needs a robust, inclusive and open mechanism. We must have reliable implementing, monitoring and accountability regulations and institutions in place,” he added.

President Elbegdorj is among the many leaders who will address the general debate of 70th General Assembly which opened this year with the adoption of Agenda 2030 and 17 Sustainable Development Goals.

Made up of all the 193 Member States of the UN, the Assembly provides a forum for multilateral discussion of international issues covered by the UN Charter.