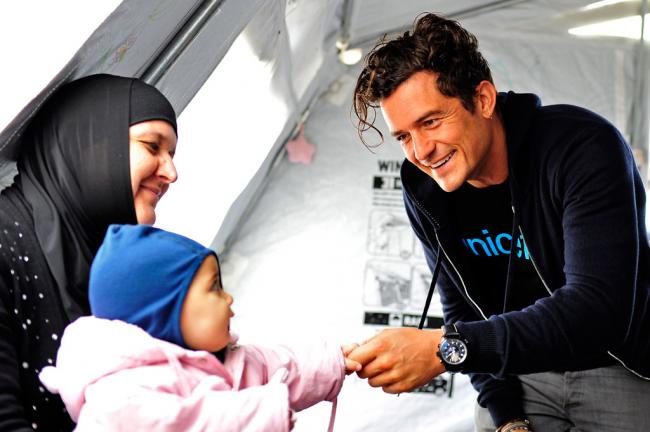 During a visit to a refugee and migrant reception centre near Gevgelija in the former Yugoslav Republic of Macedonia, at the border with Greece, Bloom listened to stories of perilous journeys, concerns and hopes for the future from the children he met.

“These children have travelled through one of the deadliest refugee and migrant routes in the world. I talked to children who endured terrifying journeys, often in extreme weather conditions and for many, walking in the only shoes and clothes they have,” he stated in anews release.

“They are being shuttled from one authority to another, crossing numerous borders, uncertain of the risks ahead. If they arrive safely at their final destination, they still fear an uncertain future. We need to protect and support them,” he added.

Many of the children have escaped violence in Syria, Afghanistan and Iraq. Through UNICEF-supported services at the reception centre near Gevgelija, children now have access to a safe place to rest, play and obtain food and water, warm clothes, sanitation and the hygiene and protection services that they need.

Among those Bloom met was 17-year-old Tarek from Syria who spoke about the terror of the boat trip from Turkey to Greece and the pain of leaving his entire family in Damascus.

Like many unaccompanied minors on the move in Europe, he is traveling with a Syrian family he met during the journey after saving their 10-year-old daughter from drowning.

While Tarek praised the humanity of the support staff at the child-friendly space, he also expressed to Bloom his deep despair of not knowing what the future holds for him.

Rajae Msefer Berrada, UNICEF Deputy Representative in the former Yugoslav Republic of Macedonia, explained the importance of protecting the children as people flee the conflict and Europe faces one of its greatest crises in recent times.

“We must provide services in countries where children are on the move, and in countries of origin and destination, for play, healthcare and protection. We must put children’s best interests at the heart of our action and ensure families are kept together throughout their journey. We cannot fail these children,” she said.

UNICEF noted that while earlier scenes of chaos at the border have now greatly improved, a large number of people, including children and women, are not being registered – raising concerns that those in need may not have access to the necessary services.

Nearly 100,000 people – one-third of whom are women and children – have been registered at the border at Gevgelija since June this year. As the crisis continues to grow, UNICEF estimates that as many as 320,000 women and children fleeing to Europe could be in need to assistance over the next six months.

On Wednesday, Secretary-General Ban Ki-moon will convene a high-level meeting in New York on migration and refugee movements, on the side lines of the high-level segment of the UN General Assembly.