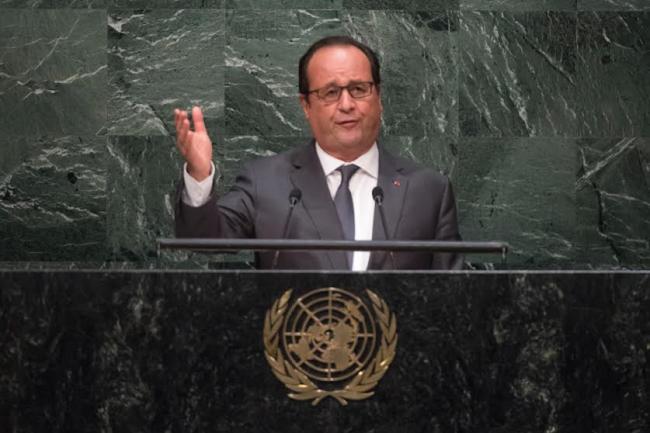 Syria: Hollande pledges to work towards political solution but not with Syrian leader

India Blooms News Service | | 29 Sep 2015, 09:15 am
#Syria, #Syrian crisis, # Conflict, # UN, # Francois Hollande
New York, Sept 29 (IBNS): France is ready to work with all countries that want to find a political solution to the four-year crisis in Syria except for President Bashar Al-Assad, who cannot be part of the solution, French President FranÃ§ois Hollande told the UN General Assembly on Monday at the annual general debate.

Syria is “calling once more for our mobilization and intervention,” said President Hollande, underlining that the civil war has to date killed more than 250,000 people. He recalled that the “Syrian tragedy” follows an uprising which sought to undermine the “dictatorship of Bashar Al-Assad.”

“It is not because terrorists massacre, loot, and rape that there should be pardon or amnesty for the regime that created the situation,” the French President continued.

He insisted that the Office of the UN High Commissioner for Refugees (UNHCR) and the World Food Programme (WFP) must be provided the means to ensure the necessary support, and refugees must be allowed to work in their host countries.

He further announced that France is contributing €100 million to WFP for refugees in countries neighbouring Syria.

Meanwhile, President Hollande saluted the immense progress accomplished by the United Nations since its creation 70 years ago, while noting that unfortunately the world is still challenged by many conflicts.

Enumerating many natural disasters caused by climate change, he said the upcoming climate change conference in Paris must answer the question: “Is humankind capable of deciding to preserve life on the planet?” while noting some progress, singling out recent commitments made by the United States and China.

Furthermore, he said he favoured a global climate agreement, differentiating the responsibilities of each country, and laid out three conditions for success in Paris: every country must make commitments on emission reductions; a review mechanism must be established to allow for revisions every five years; and developed countries should fulfil their commitments to developing countries by ensuring $100 billion in support.

In addition, he announced France will increase its annual funding for climate from €3 billion to €5 billion to be disbursed, not as loans, but as grants.