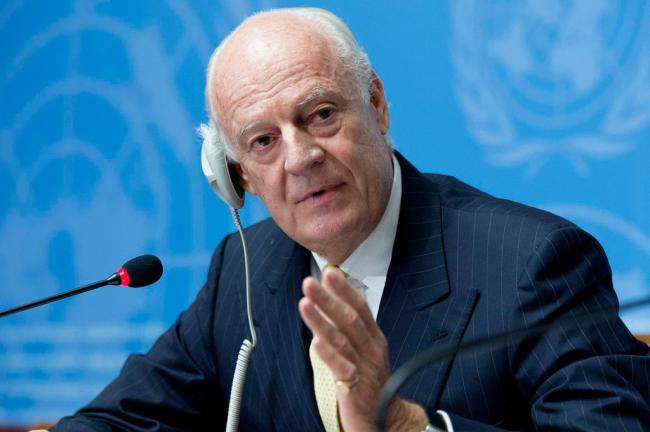 India Blooms News Service | | 23 Sep 2015, 09:20 am
#UN, # Syria
New York, Sept 23 (IBNS) Returning from consultations with Syrian interlocutors in Damascus and Istanbul, the United Nations Special Envoy for Syria announced on Tuesday that he met with facilitators appointed by the Secretary-General to head working groups designed to find a political solution to the five-year conflict.

Last July, Special Envoy Staffan de Mistura presented the initiative before the Security Council, which endorsed it in August. The plan calls for consultations and discussions with Syrian parties in four thematic working groups.

“The Working Groups are intended to provide Syrians with a platform to address in-depth themes that are certainly not new, but have lacked to date sustained intra-Syrian discussion.” de Mistura said in a note to correspondents.

“It is hoped that their outcomes could eventually set the stage for a Syrian agreement to end the conflict on the basis of the Geneva Communiqué,” he added, referring to the document that was agreed in 2012 and sets out a clear roadmap for a democratic transition and remains the basis for any peaceful settlement.

While the participation of Syrians is central to move forward, the Security Council has also “emphasised the need for robust international and regional assistance” in support of the efforts of the Special Envoy, the note added.

The facilitators appointed by the Secretary-General for the thematic working groups are: Jan Egeland for safety and protection; Nicolas Michel for political and legal issues; Volker Perthes for military, security and counter-terrorism; and Birgitta Holst Alani for continuity of public services, reconstruction and development.

Over the last two days, de Mistura and his deputy, Ramzy Ezzeldin Ramzy, met with the facilitators and discussed draft agendas with a view “to ensuring coordination and parallel progress of the working groups.”

de Mistura is now heading to New York to carry these discussions forward in the margins of the UN General Assembly.

“This is the defining humanitarian challenge of our times,” the envoy stated. “The Syrians deserve that we move faster towards a political solution.”