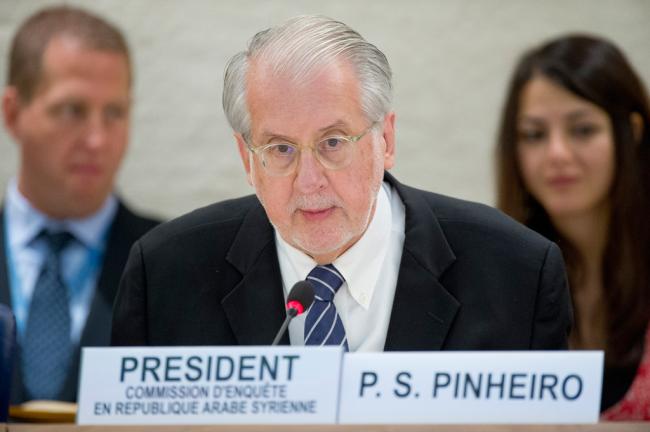 India Blooms News Service | | 22 Sep 2015, 09:14 am
#Syria, # UN
New York, Sept 22 (IBNS) It is time to overcome diplomatic failure and recognise that there is a global interest in returning Syria to peace, the head of a United Nations-mandated human rights inquiry said today, warning that if conflict continues, nations will be "fuelling a war to keep their influence over a country that will barely exist."

“The international community cannot pretend to be blind to the cycle it has allowed to prevail for so many years,” said Paulo Sérgio Pinheiro, Chair of the Independent International Commission of Inquiry on Syria.

In a statement to the UN Human Rights Council in Geneva, Pinheiro told delegates that it is time to give “full and effective support to the ‘de Mistura plan’,” a new political approach to solving the conflict presented in late July by the UN Special Envoy for Syria, Staffan de Mistura.

The plan calls for consultations and discussions with the Syrian parties in four thematic working groups: safety and protection for all; political and legal issues; military, security and counterterrorism issues; and continuity of public services and reconstruction and development.

“And it is time for the Security Council to act with the responsibility vested in it,” Pinheiro continued. “It is auspicious to note that Russia and the United States have agreed to discuss mechanisms for ‘deconfliction’ in Syria.”

He added that States cannot continue affirming their support for a political settlement “while arming belligerents, failing to adequately fund humanitarian services, and be taken aback by the spreading refugee crisis.”

Indeed, he noted that the current refugee crisis – which he highlighted has existed for years in Turkey, Lebanon, Jordan and Iraq – is largely driven by the Syrian conflict.

“The Syrian tragedy has now reached European shores. The deaths of children, suffered daily by Syrian families for more than four and a half years, are being mourned afresh. The profound human suffering, long seen in the hospitals and camps of Syria’s neighbours, is etched on the haggard faces of refugees huddled in European train stations and camping behind razor wire at Schengen borders.”

The Chair’s statement follows the release on 3 September of the Commission’s latest report on the situation in Syria, which found that atrocities are being carried out by both Government and terrorist groups, such as the Islamic State of Iraq and the Levant (ISIL) and Jabhat Al-Nusra.

“In mid-August, a Government bombardment of a market in Douma resulted in scores of civilian casualties. […] Anti-Government armed groups continue to conduct indiscriminate shellings on civilian areas, particularly in Aleppo, Damascus and Dara’a cities,” Pinheiro reiterated in today’s statement.

He concluded the statement by urging for “narrow national or regional self-interests” to be set aside, insisting that “Syrian victims deserve no less.”