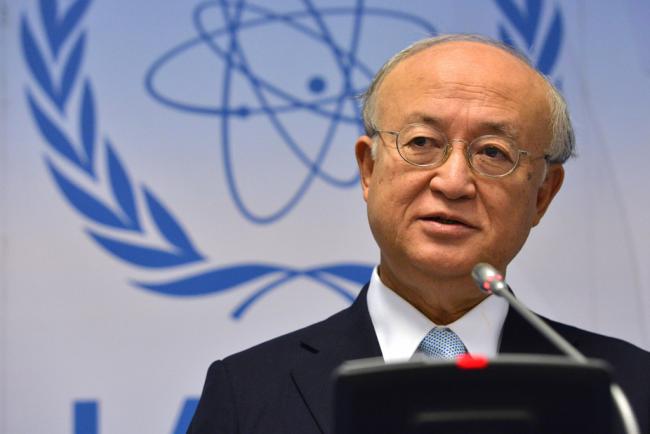 India Blooms News Service | | 22 Sep 2015, 08:58 am
#Iran, # Saudi Arabia, # UN, ##UN
ew York, Sept 22 (IBNS) Significant progress has been achieved in the implementation of a road-map to resolve all outstanding issues regarding Iranâ€™s nuclear programme, the head of the United Nations International Atomic Energy Agency (IAEA) said today, after visiting a nuclear site and meeting senior Government officials, including the President, over the weekend.

“I reported [to the IAEA Board] on my visit to a particular location at the Parchin site, which, as I have said many times, is important in order to clarify issues related to possible military dimensions to Iran’s nuclear programme,” Director General Yukiya Amano toldthe press at the Agency’s headquarters in Vienna.

This was the first time the Agency visited the location; it had previously only been able to observe it using satellite.

“Inside the building, we saw indications of recent renovation work. There was no equipment in the building. Our experts will now analyse this information and we will have discussions with Iran in the coming weeks, as foreseen in the road-map,” Amano reported.

This process is taking place under the Joint Comprehensive Plan of Action (JCPOA) recently agreed by Iran and the E3/EU+3 countries – China, France, Germany, Russia, the United Kingdom, and the United States – and which gives the IAEA greater access to information and to sites in Iran.

“As I have stated in my reports to the Board, the extensive work that has been conducted at the location since early 2012 undermines the Agency’s ability to conduct effective verification there,” Amano continued.

“Before our visit, certain IAEA safeguards activities were carried out at the particular location at the Parchin site. These included the taking of environmental samples.”

The Director General underlined that sample taking is a “complex process,” and that as a result of experience gained over the years, the Agency has, in certain circumstances, permitted States’ representatives to carry out activities in support of its verification work.

“This is done in a way that ensures that the Agency’s verification processes are not compromised,” he ensured.

“In the case of Parchin, the Iranian side played a part in the sample-taking process by swiping samples. The Agency can confirm the integrity of the sampling process and the authenticity of the samples, which were taken at places of interest to the Agency at the particular location in Parchin.”

He added that the samples have been brought to Vienna, where it will be analysed by experts.

Iran’s nuclear programme – which its officials have stated is for peaceful purposes, but some other countries contend is driven by military ambitions – has been a matter of international concern since the discovery in 2003 that the country had concealed its nuclear activities for 18 years in breach of its obligations under the Nuclear Non-Proliferation Treaty (NPT).