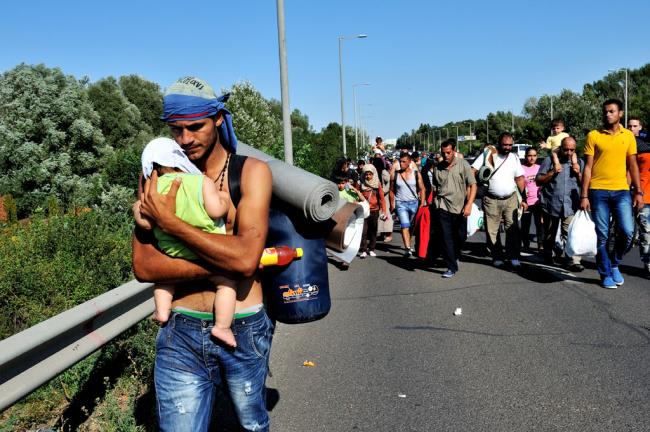 India Blooms News Service | | 19 Sep 2015, 09:07 am
#UN, # Europe , # refugee crisis
New York, Sept 19 (IBNS) In the wake of yesterdayâ€™s â€œmayhemâ€ on the Serbian border with Croatia, which has now closed some of its entry points, and the dramatic situation on the Hungarian border this week, the United Nations is urging a coherent and united response to Europeâ€™s refugee crisis.

Speaking at a press conference in Geneva today, the spokesperson for the UN High Commissioner for Refugees (UNHCR), Adrian Edwards, said that more than 442,440 refugees and migrants have arrived via the Mediterranean so far this year, and some 2,921 of them have died. With 4,000 people arriving on the Greek islands daily, the crisis is growing.

“The suffering and risks for thousands of refugees and migrants are meanwhile increasing as uncertainty and a lack of information fuels desperation, raises the likelihood of further incidents, and stokes hostility towards people who have fled persecution and conflict and are in need of help,” said Edwards.

“These occasions may be the last opportunity for a positive, united and coherent European response to the crisis,” said the spokesperson.

“UNHCR recognizes that Europe is struggling to deal with this situation,” he continued, highlighting that “the countries and their citizens that have shown willingness to resettle refugees and respond positively to a situation which although challenging is manageable, provided that Europe is united in contributing to an effective response.”

UNHCR proposed an emergency plan of action earlier this week that called for the immediate creation of facilities in Greece to receive, assist, register and screen people arriving. It also called for the commencement of the relocation of 40,000 refugees to participating EU countries, as previously agreed, to be expanded with voluntary pledges by EU States.

The agency also asked for an emergency package from the EU to Serbia to establish sufficient capacity to assist, register and relocate people to other European countries, and stressed the need to substantially increase the opportunities for Syrian refugees being hosted in neighbouring countries to access legal channels to the EU.

It also urged an increase in opportunities for Syria refugees to access legal channels to the EU, including enhanced resettlement and humanitarian admission, family reunification and humanitarian and student visas.

Meanwhile, the UN Children’s Fund (UNICEF) issued a statement on the situation of refugee and migrant children in Hungary, urging for them to be “treated with dignity.”

UNICEF is currently in discussions with Hungary to see how refugee and migrant children can be adequately protected, in line with the country’s commitments to the Convention on the Rights of the Child.

“The Convention requires governments to take every necessary measure to protect all children and to provide the special support required by children who are refugees or who are seeking asylum,” the agency said.

UNICEF has offered the Hungarian Government assistance to strengthen the protection of refugee and migrant children, following recent clashes on the Hungary-Serbia border. This assistance also comes in the wake of reports of new legislation in Hungary that could result in children being detained, prosecuted, and separated from their parents.

“Children should not be criminalized for being a refugee or a migrant, nor should they be separated from their families,” cautioned the agency.

“UNICEF also urges all European Member States to move quickly to provide all refugee and migrant children the protection and care to which they are entitled. No single country can shoulder this responsibility alone.”