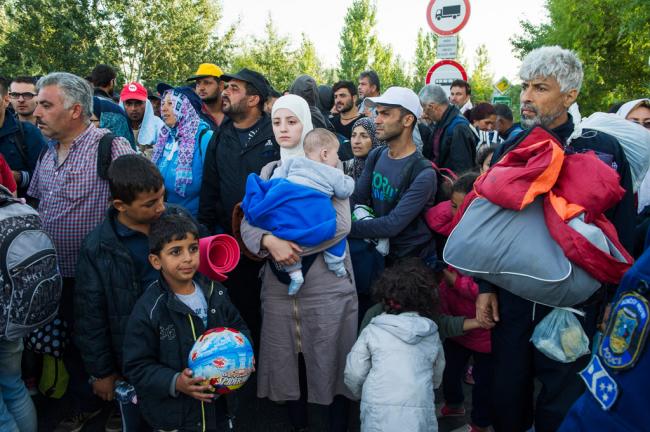 India Blooms News Service | | 18 Sep 2015, 09:00 am
#Hungary, # UN, # Rights
New York, Sept 18 (IBNS): The United Nations human rights chief said on Thursday he is "appalled" at the recent actions displayed by the Hungarian Government in its treatment of refugees and migrants, and urged European institutions to take firm action to respond to the crisis affecting several countries.

“The images of women and young children being assaulted with tear gas and water cannons at Hungary’s border with Serbia were truly shocking,” High Commissioner for Human Rights Zeid Ra’ad Al Hussein said in a news release.

He said, “I am appalled at the callous, and in some cases illegal, actions of the Hungarian authorities in recent days, which include denying entry to, arresting, summarily rejecting and returning refugees, using disproportionate force on migrants and refugees, as well as reportedly assaulting journalists and seizing video documentation. Some of these actions amount to clear violations of international law.”

The Hungarian Government has built a fence on its border with Serbia and closed border crossings. A new law criminalizing irregular entry into Hungary came into effect Tuesday, according to the High Commissioner’s office (OHCHR).

Hungary has reportedly already begun returning refugees to Serbia, following very summary proceedings. The Government is also talking of building more fences along its other borders with Romania and Croatia.

Hungarian Prime Minister Victor Orban defended the measures, arguing that they concerned “defending our lifestyle,” and contrasted this lifestyle with that of Muslims, the news release pointed out.

High Commissioner Zeid deplored the xenophobic and anti-Muslim views that appear to lie at the heart of current Hungarian Government policy.

“The package of measures brought in overnight between Monday and Tuesday is incompatible with the human rights commitments binding on Hungary,” the High Commissioner said.

He added, “This is an entirely unacceptable infringement of the human rights of refugees and migrants. Seeking asylum is not a crime, and neither is entering a country irregularly.”

“Many have made harrowing sea journeys to avoid other border fences,” he added.

He also said he is extremely concerned at the “repeated failures” of the European Union to agree on firm and principled action to respond to the crisis in Hungary and elsewhere. “Current events highlight the urgent need for bolder and more human-rights driven migration and asylum policies in Europe.”