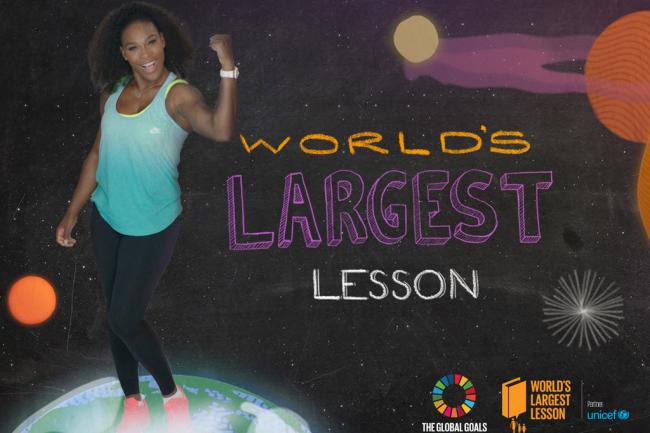 India Blooms News Service | | 05 Sep 2015, 10:11 am
#UNICEF, # World's largest lesson
New York, Sep 5 (IBNS): The United Nations Children's Fund (UNICEF) and the Global Goals campaign on Friday launched the World's Largest Lesson, an initiative to teach children in more than 100 countries about the new Sustainable Development Goals that will be adopted by the UN General Assembly later this month.

The Global Goals campaign was launched just yesterday at UN Headquarters, and aims to reach the 7 billion people on earth to make the world body’s new development targets “famous.”

“The World’s Largest Lesson will do more than teach children about the global goals. It will engage them in the effort to achieve those goals – educating them about the challenges that are shaping their futures and encouraging them to drive change in their own communities,” said UNICEF Executive Director Anthony Lake in a press release.

In addition, Government leaders from a number of countries will be teaching and participating in lessons.

The UN estimates that a potential 500 million girls and boys between the ages of 8 and 14 will have the chance to learn about the Global Goals.

These range from ending extreme poverty, to tackling climate change, and giving all children the opportunity to gain a quality education.

The World’s Largest Lesson will be held in classrooms on every continent during the week of 28 September.

As part of the campaign specially created lesson materials include an animated film by Aardman and author and education expert Sir Ken Robinson that introduces the Global Goals, and a downloadable comic book by Josh Elder, Karl Kesel and Grace Allison.