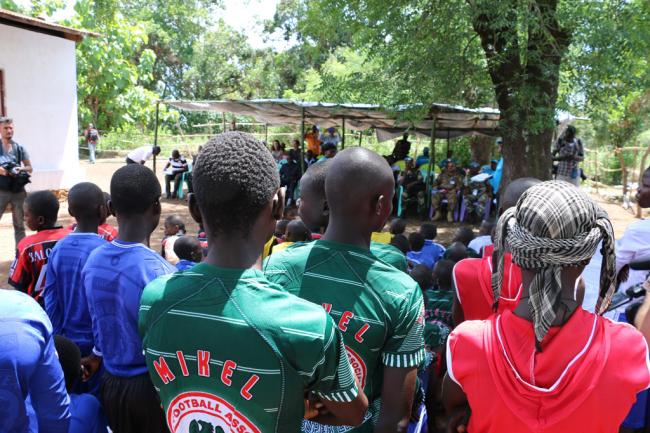 India Blooms News Service | | 29 Aug 2015, 09:38 am
#UNICEF, # Children, # Central Africa
New York, Aug 29 (IBNS): The United Nations Children's Fund (UNICEF) announced on Friday that 163 children have been released by an armed group in the Central African Republic, where thousands of other boys and girls are still serving as combatants, cooks and messengers for the country's militant factions.

“This release is a sign that the process of implementing the commitment made by the leaders of these groups, as a part of the peace and reconciliation process, is on track,” UNICEF Representative in the Central African Republic (CAR) Mohamed Malick Fall said in a press release.

“We fully expect to see hundreds more children released before the end of this year,” Fall said.

The 163 children, five of the girls, were released on Friday in a ceremony in the town of Batangafo where the handover was facilitated by UNICEF and the UN Multidimensional Integrated Stabilization Mission in the Central African Republic (MINUSCA).

The children received medical care and spoke to social workers before they were taken to a transition centre where they will be supported in either going back to school or enrolling in vocational training. UNICEF and partners will also trace and reunify the children with their families.

“MINUSCA is resolved with all partners to ensure the protection of children and I herewith reaffirm its determination to multiply efforts to identify and separate children who are waiting to return to normal life,” said Diane Corner, the deputy special representative of the UN peacekeeping mission in CAR.

According to UNICEF, between 6,000 and 10,000 children have been associated with armed factions in the Central African Republic since 2013 including those serving as combatants, as well as those working as cooks, messengers and in other roles.

Smaller release ceremonies also took place in the capital Bangui last week, and earlier in August in other districts, bringing to 645 the number of children liberated since a May agreement by the country’s 10 armed groups to release all children from their ranks.

The agreement also commits the groups to ending additional recruitment of children and gives UNICEF and its partners immediate and unrestricted access to the areas under the groups’ control in order to identify and verify the number of affected children and to secure their release.