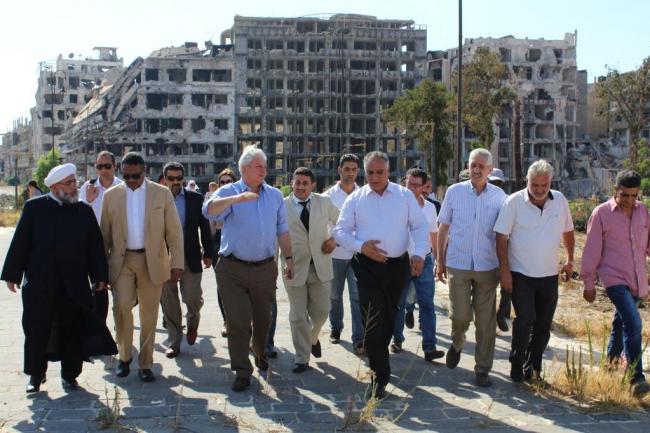 India Blooms News Service | | 18 Aug 2015, 02:49 pm
#Syria, # UN relief chief
New York, Aug 18 (IBNS): Horrified by the "total disrespect" for civilian life in Syria, as evidenced by airstrikes on a market in Douma, the top United Nations humanitarian official today warned that the protracted conflict in the country not only severely affects the lives of millions of people, but also threatens the stability of the entire region and beyond.

“In Homs, I saw with my own eyes inestimable human suffering. In the Old City, I saw the complete destruction of almost every home, beyond which lies the destruction of lives. Behind every window of every destroyed home, we must remember that there were people whose lives have been shattered, like the family of Ahmed who I sat with to hear his harrowing story amid all this violence and destruction,” stated the Under Secretary-General for humanitarian affairs and Emergency Relief Coordinator, Stephen O'Brien, during a press conference. Wrapping-up a three-day visit to Syria on Monday, during which he assessed the impact of intense fighting on recently returned families,  O'Brien reminded journalists that civilians have borne the brunt of this conflict for over four years now, with 220,000 people killed, more than a million injured and almost half of the population displaced. “Attacks on civilians are unlawful, unacceptable and must stop. I am particularly appalled about reports of yesterday's airstrikes, causing scores of civilian deaths and hundreds injured, right in the centre of Douma, a besieged part of Damascus. I am horrified by the total disrespect for civilian life in this conflict and appeal to each and every party…to protect civilians and respect international humanitarian law,” the Under Secretary-General continued. These attacks, which targeted a market place, were also vigorously condemned by the UN Special Envoy for Syria, Staffan de Mistura. “The Government's bombing of yesterday is devastating. Attacks on civilian areas with aerial indiscriminate bombs, such as vacuum bombs, are prohibited under international law. Hitting crowded civilian markets and killing almost one hundred of its own citizens by a government is unacceptable in any circumstances,” de Mistura declared. Furthermore, due to cuts by non-State armed groups, at least five million people in Damascus have been without water for the past three days, the third time this year they have undergone this suffering. In Aleppo, two million people have also been deprived of their water supply for 17 days, while 300,000 people in Dar'a and surrounding villages have endured water cuts seven times this year. “It is unacceptable for those engaged in conflict to use access to water and other services as a weapon of war,” stressed Stephen O'Brien. However, the Relief Coordinator said he had constructive discussions with government officials on ways to strengthen aid operations, hoping that concrete steps would now be taken. “The United Nations and our partners are providing assistance to millions of Syrians in need, including by crossing conflict lines and international borders. However, I remain extremely concerned for the welfare of the 4.6 million people stuck in hard-to-reach and besieged areas,”  O'Brien emphasized. “Freedom of movement for all people trying to flee the violence and conflict must be ensured by all parties.” Expressing deep concern about the lack of funding for humanitarian operations in Syria and the region, which are less than 30 percent funded, the Under Secretary-General called on the international community to step up to the appeal for resources to fund the essential life-saving and protection work needed across Syria urgently. Photo: OCHA