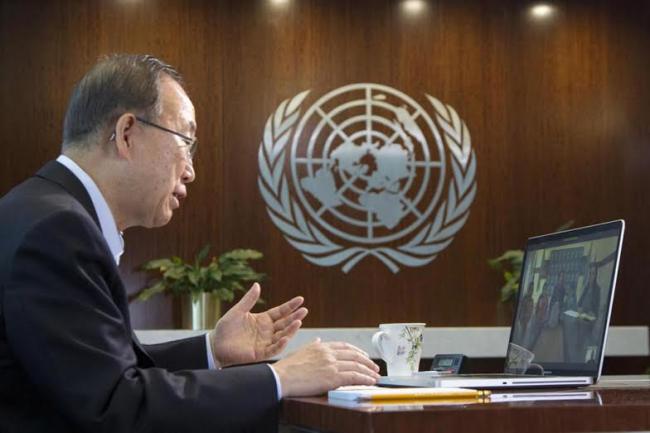 In a video chat conducted this morning, the Secretary-General told three Gazan children that despite the many obstacles and difficulties in their daily lives, they remained committed to education and were, as a result, “an inspiration” to all.

The children – Rua’a Naser Abdullah Qdeih, Mahmoud Abu A’amera and Bayyan Haniyya – are students of the UN Relief and Works Agency for Palestine Refugees (UNRWA) school system, which currently operates 700 schools in the occupied Palestinian territory, Jordan, Lebanon and Syria but is also facing its most severe financial crisis ever.

“It is common sense to invest millions in education instead of billions in weapons,” said Ban, who explained that he had been urging world leaders to ramp up material support for UNRWA.

“The cost of education is low,” he added. “The price of inaction is too high.”

As things currently stand, UNRWA has enough money to only maintain its services essential to protect public health including immunizations for children, primary health care, relief and sanitation and some emergency programmes through to the end of 2015.

The funding is insufficient to guarantee the stable provision of its education services from September onwards.

Bayyan Haniyya, a ten-year-old Palestine refugee girl from Beach camp, called on the UN chief to help defend her right to education despite the dwindling resources.

“I want to become a doctor so I can help my people and serve my nation,” she told Ban.

“I appeal to you to as much as possible to help Palestinian refugee children go back to school and achieve their potential.”

The funding shortfall affecting UNRWA’s education services comes amid a range of wider challenges facing the UN’s efforts to stabilize the enclave, including an ongoing Israeli blockade and stalled reconstruction efforts following the 2014 conflict between the Palestinian group Hamas and Israeli forces.

At the same time, Gaza is home to the highest unemployment in the world, with more than 60 per cent of young people not working.

In addition, electricity is available only eight to 12 hours a day, also affecting water supply which covers a fraction of daily needs.

Up to 90 million litres of partially-treated sewage are being discharged into the Mediterranean Sea every day due to electricity and fuel shortages. Finally, maternal mortality rates are estimated to have nearly doubled in the last 12 months.

During his video call, Ban reiterated that education remains key to development and peace in Gaza and across the Middle East, particularly during a time in which extremists are aggressively recruiting young people throughout the region.

“Education is a passport to dignity, prosperity and security,” he stated. “By supporting UNRWA, we support education, a better future and a life of dignity for all.”