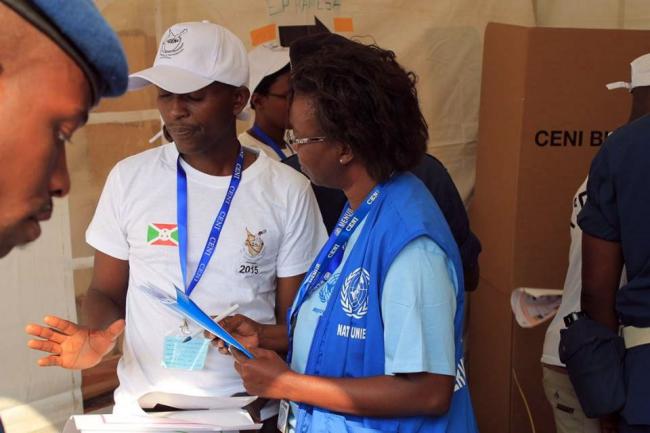 This was the main conclusion of MENUB’s preliminary findings on the conduct of the presidential polls in Burundi, which took place after two postponements in an environment of “profound mistrust” between opposing political camps.

The decision of the incumbent President to run for another term precipitated a deep political and socioeconomic crisis, the mission said.

“The Constitutional Court's ruling on the admissibility of the President's candidature for a third mandate did not solve the wider political problem of presidential term limits in Burundi, but rather exacerbated further controversy, protests and tensions,” the Mission explained in a statement issued today.

Freedoms of expression, assembly and association, essential conditions for the effective exercise of the right to vote, remained severely impaired. “Violence, although observed in a less intense degree than during the period preceding the 29 June [legislative and communal] elections, remained an unfortunate feature of the entire process.”

The various dialogue efforts, including the most recent initiative under the leadership of Ugandan President Yoweri Museveni and the East African Community (EAC), remained inconclusive, stated MENUB.

“Also, the parties did not reach agreement on a consensual electoral calendar. Nevertheless, on election day, Burundians in most places went peacefully to the polls to cast their ballots.”

Out of the eight presidential candidates, four declared that they would withdraw from the race. However, their names remained on the ballot, pointed out the Mission.

It also found that media freedom remained severely restricted. “Private and independent media outlets that were destroyed during the failed coup did not reopen, despite national and international appeals to the Burundian government to enable media to operate. State-owned media did not provide balanced media coverage to all presidential candidates.”

But tabulation at the observed municipal and provincial locations was carried out expeditiously, albeit in a disorganized manner, they said.

In conclusion, MENUB reiterated the Secretary-General's call “for the cessation of all forms of violence respect of basic human rights and resumption of dialogue.”