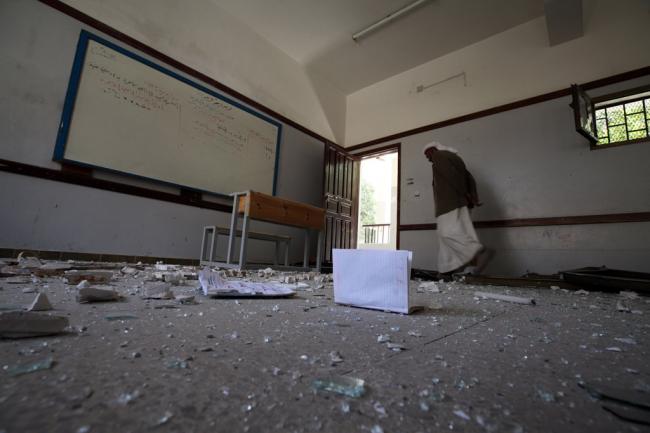 India Blooms News Service | | 25 Jul 2015, 10:02 am
#As conflict disrupts education in Yemen, # UNICEF backs â€˜catch-upâ€™ classes
New York, Jul 25 (IBNS): With intensive bombardments and street fighting in Yemen forcing more than 3,600 schools across the country to close and disrupting education for some 1.8 million children, the top United Nations Childrenâ€™s Fund (UNICEF) official there appealed on Friday to the warring parties to respect the safety of schools.

New York, Jul 25 (IBNS): With intensive bombardments and street fighting in Yemen forcing more than 3,600 schools across the country to close and disrupting education for some 1.8 million children, the top United Nations Children’s Fund (UNICEF) official there appealed on Friday to the warring parties to respect the safety of schools.

“Giving Yemen’s children an education is crucial for their own futures as well as those of their families and communities,” Julien Harneis, UNICEF Representative in Yemen said in apress statement issued in the capital, Sana’a.

“We are doing all we can to return children to school so that they don’t completely lose out on their education,” Harneis said.

He added, “We urge the parties to the conflict to respect the safety of schools so as to give children a chance to learn.”

According to UNICEF, months of intensive bombardment and street fighting have forced more than 3,600 schools to close and driven students and their families to safer areas of the country.

At least 248 schools have been directly damaged; 270 others are hosting internally displaced people (IDPs) and 68 are occupied by armed groups.

To help ensure that children don’t completely miss out on their education, UNICEF is supporting catch-up classes for over 200,000 students – just some out of around 1.8 million children whose schooling has been interrupted for two months or more.

According to UNICEF, Yemen’s Ministry of Education is helping mobilize the necessary teachers, some of whom have themselves fled the violence, and if schools are damaged, or are being used by displaced people or armed groups, temporary learning spaces such as tents will be provided.

And UNICEF said it is providing teaching and learning resources, including notebooks, pencils and school bags to the students, given that the income of many families has been severely affected, while markets have been destroyed or closed making it difficult for students to acquire the materials they need.

“The next school year is scheduled to start on 5 September, but much will depend on the security situation,” the UN agency said.

He added, “Students at schools that are able to resume teaching will be provided with catch up classes to cover more than two months’ of school time lost as a result of the conflict.”

UNICEF is asking for $11 million dollars to support the rehabilitation of damaged schools, provision of teaching and learning resources, training of teachers and community workers to provide psychosocial support, and to carry out a ‘back-to-school’ campaign.