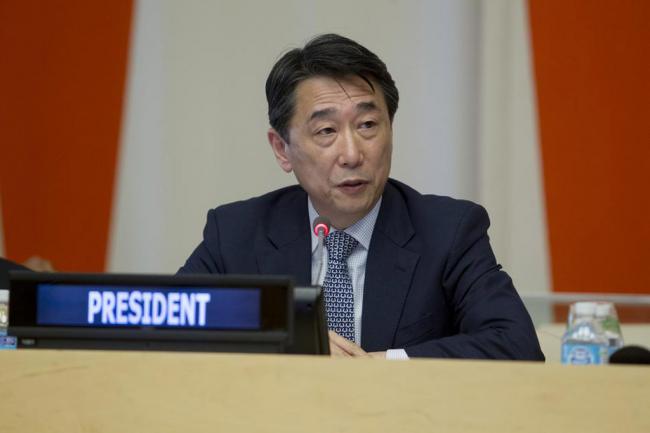 India Blooms News Service | | 25 Jul 2015, 09:53 am
#Oh Joon United Nations Economic and Social Council
New York, Jul 25 (IBNS): Opening the first meeting of its 2016 session on Friday, the United Nations Economic and Social Council (ECOSOSC) elected Oh Joon, of Republic of Korea as its new President, who spotlighted the vital work â€“ for the Council and the wider Organization â€“ as the international community transitions from the landmark Millennium Development Goals to the post-2015 development agenda.

In his inaugural address to the main UN economic and social body, Oh said, “We are at the cusp of an important era. It is time for us to take a new step in the process to create a better world for all."

He added, "But of course, all of our future efforts should be based on what we have achieved so far. Our systems and structures are in place. And the issues have been well defined.”

He noted that the Council would lead efforts to build an inclusive and engaging global partnership, “one that welcomes the significant contribution that all stakeholders can provide – particularly through the Development Cooperation Forum.”

In order to fulfil the new responsibilities of the post-2015 agenda, ECOSOC needs to be more relevant to what is happening in the world, he said.

He underscored, “Relevance is the key word. If we, in the ECOSOC, look like continuing the same debate that we have had for decades, it is time for us to look out to see what is happening in the world.”

Oh said the Council needs to “consolidate its niche by being more flexible in its agenda and its coverage of issues. We should continue to evolve and adapt as necessary to keep ECOSOC up-to-date to this fast changing world.”

Outgoing ECOSOC President, Martin Sajdik, pointed to youth employment, eradication of poverty and a cleaner environment as some of the driving forces of his stewardship.

In his speech, Sajdik noted that he had been “nothing short of impressed” by the level of engagement that youth had brought to the UN as part of the ECOSOC Youth Forum.

“During my tenure, the ECOCOC Youth Forum has reached new records in attendance, in the room and outside of it, through social media, involving young people from all corners of the world."

He added, “The Youth Forum has also been a call to all of us to reach out, to engage and communicate our aims to the world.”

Turning to the post-2015 development agenda, Sajdik emphasized that with ECOSOC, as a multi-stakeholder platform, the Council’s past work had ensured that the seeds sown in September fall on fertile grounds.

The ECOSOC Bureau includes each of five world regions – Latin America and the Caribbean, Africa, Asia, East Europe, and West Europe and the other developed countries. Each year, a representative from a different region is chosen to head the Council as its President.

The 54-member body – which serves as the principal organ for the socioeconomic and related work of the United Nations – also elected four Vice-Presidents.