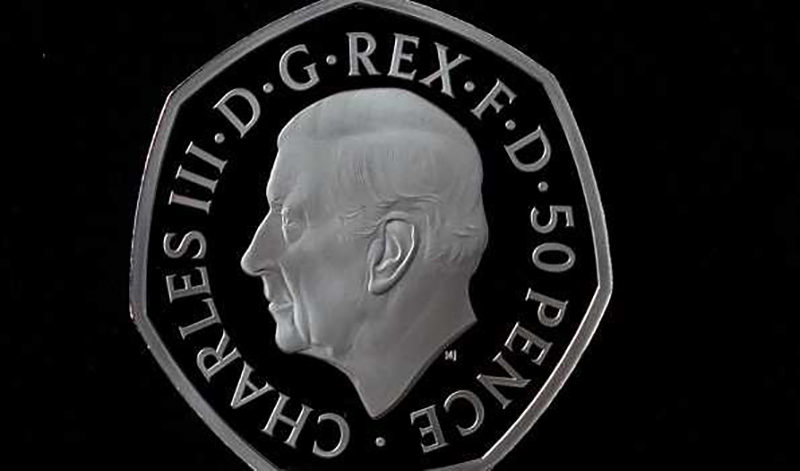 London/UNI: The first 50p coin featuring King Charles III will go into circulation before Christmas, it was reported Friday.

Meanwhile, The Royal Mint is set to launch a commemorative coin collection to celebrate the life and legacy of Queen Elizabeth II, the Sun reported.

Coin enthusiasts will spot some key design differences between the new 50p with Kings Charles' face on and the one featuring the late-Queen.

On the new 50p coin featuring King Charles III, the Monarch is not wearing a crown.

That's because Kings are not often depicted wearing a crown on coins -- whereas Her Majesty Queen Elizabeth II had one, the Sun said.

The second major difference is that the King's face is pointing in the opposite direction to the late Queen's.

On the reverse side of the coin is the same design that appeared on the 1953 crown struck to commemorate her late-Majesty's coronation on June 2, 1953.

A crown is at the centre of four Royal Arms, which are in a crucifix arrangement.

The King's effigy has been designed by the sculptor Martin Jennings, who has represented famous writers and poets including Charles Dickens and George Orwell, the report said.

The coin is part of a special collection of coins released by the Royal Mint honouring Queen Elizabeth II.

A commemorative version of the 50p coin will go on sale, alongside a £5 coin.

The Royal Mint told The Sun that old coins with the Queen won't be pulled from circulation just yet, the Sun report said.

Coins last for around 20 years, and coins with the Queen on them will be replaced within time with ones featuring the King on.

There are around 27 billion coins currently circulating in the UK bearing the effigy of Queen Elizabeth II.

From Jan 1, the Royal Mint will only make coins featuring Charles III.