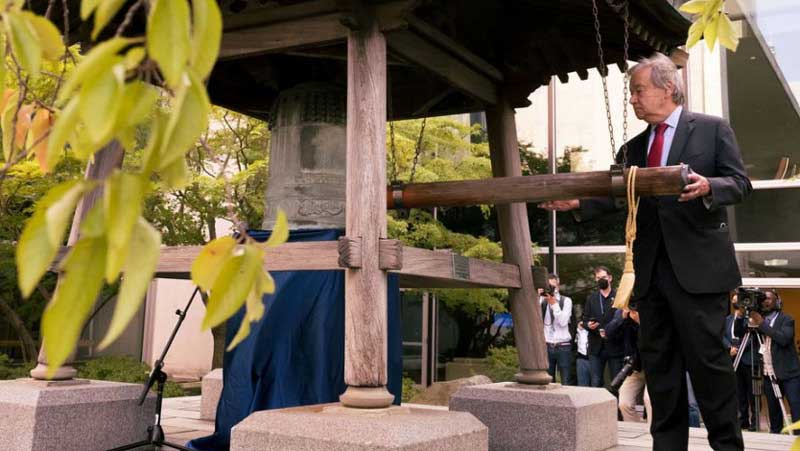 Beware the ‘poison of war’ says Guterres, championing a ‘call for peace’

New York: The UN chief commemorated the International Day of Peace on Friday with the annual ringing of the Peace Bell ceremony followed by a minute of silence at the UN Peace Garden in New York.

While thanking those in attendance for “joining us to sound the call for peace”, Secretary-General António Guterres reminded that “today, peace is under assault”.

“The poison of war is infecting our world,” by jeopardizing millions of lives, “turning people against each other, pitting nation against nation, eroding security and wellbeing, [and] reversing development”.

“It is also pushing our shared goals for the future, farther and farther away”.

Instead of fighting, “humanity should be rallying together” to tackle common challenges, stressed the UN chief.

These include poverty, hunger and inequality; climate change and biodiversity loss; the COVID-19 pandemic - which “continues to devastate lives and economies alike” - and racism, “the focus of this year’s International Day”.

While advancing peace is the UN’s primary mission, he reminded that “the task of building peace belongs to every person”.

“Peace for our planet...for developing countries being victimized by a deeply unfair global financial system…[and] in the name of equality for all – by ending all forms of discrimination, racism and hate speech”.

He continued advocating for peace for the young people “who will inherit the consequences of the decisions we make – or we fail to make”.

“And most importantly, peace for those millions of people today living through the horrors of war”.

The Secretary-General highlighted the need for global solidarity, collective action, commitment, and mutual trust, “now more than ever”.

“It starts here – and it starts now,” he said. “Let us sound the call for a world of peace for all people”.

Before ringing the peace bell, he invited those in attendance to observe a moment of silence “to reflect on the meaning and necessity of peace”.

General Assembly President Csaba Kőrösi recalled that the peace bell was created with coins donated from 60 countries in 1954.

“We need the same sense of solidarity today to ensure that our work here is relevant and impactful,” he said.

The new Assembly President explained how global peace is in “grave danger” as more refugees and displaced persons are fleeing violence today than at any time previous time in UN history.

Noting that the consequences of the Ukraine war are felt “far beyond the region,” he described it as “a stark reminder that peace can always be threatened, and no nation can take it for granted”.

This year’s theme of “End Racism. Build Peace”, compels everyone to remember that “racism is still deeply entrenched in our world,” Mr. Kőrösi said.

“Education and science are critical to tearing down the blinding stereotypes behind racism,” he argued, adding that “diverse ideas inspire creativity and drive innovation” – the source of our strength.

He urged everyone to “end racism and discrimination in all its forms, once and for all”.

Mr. Kőrösi drew attention to the Assembly’s High-Level Meeting on 21 September to mark the 30th anniversary of the Declaration on the Rights of Persons Belonging to National or Ethnic, Religious and Linguistic Minorities, describing it as an opportunity to “recommit to the practice of tolerance, inclusion and respect for diversity”.

He also paid tribute to the drafters of the Universal Declaration on Human Rights.

“May the ringing of this bell stand for the freedom and equality of everyone, everywhere,” concluded the Assembly President.

Each year the International Day of Peace, observed on 21 September, is devoted to strengthening the ideals of peace – both within and among all nations and peoples.