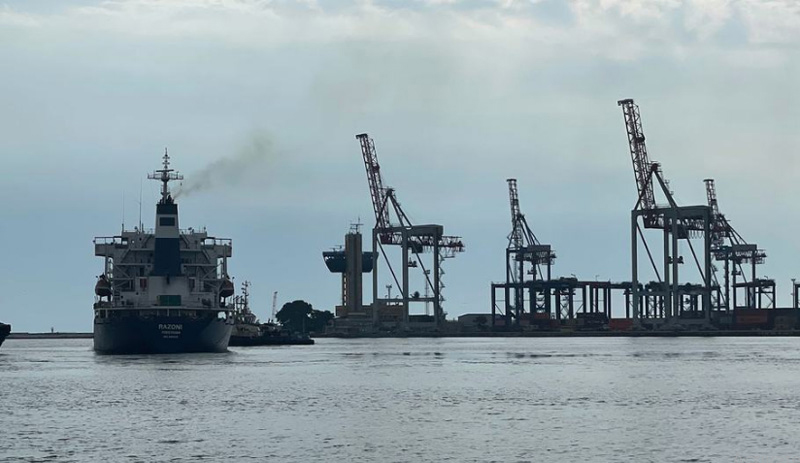 New York: The UN chief on Monday welcomed the departure of the first ship from the Ukrainian port of Odesa, carrying grain under the landmark deal signed by Ukraine, Russia and Türkiye, overseen by the UN.

The Razoni, carrying a cargo of 26,527 tonnes of corn, is the first cargo ship to leave a Ukrainian Black Sea port since 26 February, just a few days after the Russian invasion began. It is bound for the Mediterranean port of Tripoli, in Lebanon.

In a statement issued by his Spokesperson, UN Secretary-General António Guterres said that ensuring “existing grain and foodstuffs can move to global markets is a humanitarian imperative.”

The first commercial ship leaving the port of Odesa since February has sailed for Lebanon, carrying 26,527 tonnes of corn.

The deal dubbed a “beacon of hope” by Mr. Guterres when it was signed in the Turkish city of Istanbul on 22 July, is a “collective achievement” of the newly-established Joint Coordination Centre, or JCC, set up in Istanbul, under the auspices of the UN, by representatives from the three governments who inked the deal, known officially as the Black Sea Grain Initiative.

In a statement the JCC said it had agreed the specific coordinates and restrictions for what it termed the Safe Humanitarian Maritime Corridor, "and has communicated those details in accordance with international navigation procedures."

"The JCC has requested all its participants to inform their respective military and other relevant authorities of this decision to ensure the safe passage of the vessel."

The plan also paves the way for Russian food and fertilizer to reach global markets, all of which it is hoped will help reduce soaring food prices worldwide, and avert the possibility of famine afflicting millions in the months ahead.

Since the deal was signed, the parties involved “have been working tirelessly” to begin the process of shipping grain and cereals out from Ukraine’s Black Sea ports.

‘The first of many’

“The Secretary-General salutes their efforts, and he is grateful to Türkiye for its leadership”, the statement said, just after the vessel left port.

“The Secretary-General hopes that this will be the first of many commercial ships moving in accordance with the Initiative signed, and that this will bring much-needed stability and relief to global food security especially in the most fragile humanitarian contexts.”

The statement added that the UN emergency food agency, WFP, which is a major customer of Ukraine’s grain and cereals, was planning to buy, load and ship an initial 30,000 tonnes of wheat from Ukraine, on a UN-chartered vessel.

Hope for a lasting peace

Addressing correspondents at UN Headquarters in New York on the shipment, Mr. Guterres said the ship was loaded with two commodities in short supply, "corn, and hope."

While the "tragic war continues to rage", said the UN chief, the UN would continue working every day, "to bring relief to the people of Ukraine, and to those suffering the effects of the conflict around the world."

He said the war "must end, and peace must be established, in line with the Charter of the United Nations and international law.

"I hope today’s news can be a step towards that goal, for the people of Ukraine and the Russian Federation, and for the world."

Spokesperson Stéphane Dujarric said that more details from the World Food Programme would be released in the coming days.

According to news reports, Turkish authorities made clear that further shipments of grain were planned in the coming weeks, and many more journeys will have to be safely and successfully undertaken for the much-needed food supplies to make a difference.

Ukraine and Russia account for nearly a third of global wheat imports, with the two countries supplying more than 45 million tonnes annually, according to the UN Food and Agriculture Organization (FAO).

The Grain Initiative allows for significant volumes of exports from Odesa, Chernomorsk, and Yuzhny. Inspection teams will monitor the loading of grain at the ports, wit Ukrainian pilot vessels guiding the ships through the Black Sea, after which they will head out through the Bosphorus Strait, passing Istanbul, along an agreed corridor.