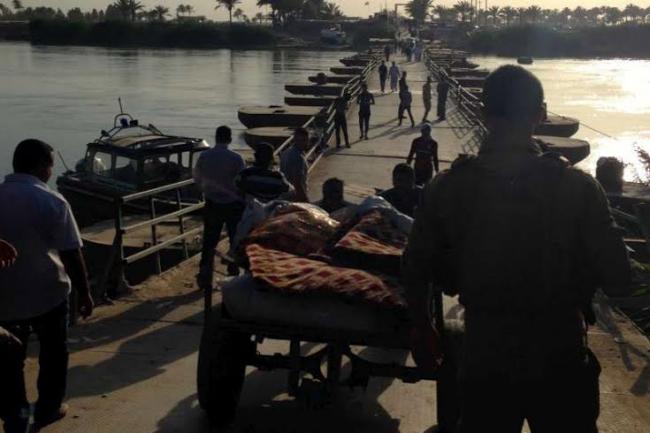 India Blooms News Service | | 30 May 2015, 02:53 pm
#Iraqis fleeing Ramadi
New York, May 30 (IBNS): Some 85,000 Iraqis have fled fighting in the central city of Ramadi but as temperatures in the region soar, thousands more still on the move are facing obstacles in reaching safety such as lack of proper shelter and "onerous requirements" for documentation, the United Nations refugee agency warned Friday.

“With thousands on the move and competition for transport, journeys that would normally take a few hours are taking days,” William Spindler, spokesperson for the Office of the UN High Commissioner for Refugees (UNHCR), told reporters in Geneva.

Even when they reach a camp for the displaced, “conditions are tough,” continued Mr. Spindler, with temperatures reaching 47 degrees [Celsius].” UNHCR is giving out fans as well as sleeping mats, jerry cans and plastic sheets to help reinforce the shade, he said.

The International Organization for Migration (IOM) estimates that some 85,000 people have fled Ramadi, in Anbar governorate, and surrounding areas, since fresh fighting between militants and pro-Government troops erupted in mid-May, and in total, more than 180,000 people are estimated to have been displaced from the Ramadi area since hostilities began in early April.

“Many people are still on the move and UNHCR, alongside others in the humanitarian community, is striving to locate them and provide life-saving assistance,” Mr. Spindler said.

“Displaced civilians still face serious obstacles at various checkpoints out of Anbar into neighbouring provinces, as local authorities impose restrictions,” he said, adding that Babylon and Kerbala governorates were closed to displaced people from Anbar.

Mr. Spindler said the Bzebiz bridge, the main entry point from Anbar into Baghdad, was closed for four days at the start of this latest exodus from Ramadi, leaving many people stranded in soaring temperatures as they waited to have sponsorship arrangements processed.

“While the bottleneck at the bridge has now eased, our monitoring teams report that the requirement for displaced people to have a local sponsor in Baghdad remains a concern,” he said.

According to UNHCR, this requirement “hampers swift access to safety, leaves people waiting in searing heat without proper shelter and makes the displaced vulnerable to exploitation.”

UNHCR said it is urging the authorities to address this problem and more broadly to ensure freedom of movement and swift access to safety of all displaced Iraqis citizens.

“Onerous requirements for other documentation have also been a concern,” the spokesperson said. “UNHCR’s partners have spent days helping 600 vulnerable people – many with serious medical conditions or living with disability – get access to Baghdad governorate.”

Unable to move to other provinces, thousands of displaced people congregated around the city of Al-Khalidiya, which is east of Ramadi and also the scene of fighting in recent weeks. Some people are moving north towards the cities of Kalar and Kirkuk.

Adequate shelter is one of the key needs for thousands of displaced people, who are out in the heat for long periods, the refugee agency noted, and said it is focusing on providing shelter for the displaced.

“The United Nations advocates for the respect of the fundamental human rights of freedom of movement and access to safety for all Iraqis in flight,” Mr. Spindler said. “Being able to reach a place of safety makes the difference between life and death for desperate displaced people on the move.”