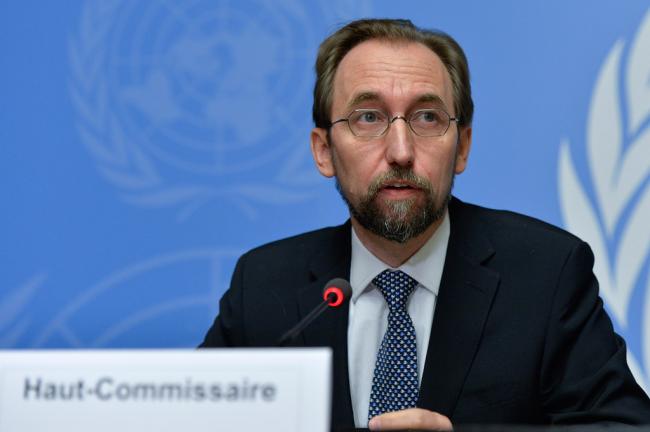 India Blooms News Service | | 27 May 2015, 08:53 am
#UN rights chief spotlights Burundi, # migrant crises in Europe and Asia
New York, May 27 (IBNS): The top United Nations human rights official drew attention to several issues of concern on Tuesday in an informal address to the Geneva-based Human Rights Council from the eruption of violence in Burundi and the overflowing migrant dilemmas in the Mediterranean and South-East Asia, to the protracted and worsening conflict in South Sudan.

“When I left Burundi, on 15 April, 6,000 Burundians had fled the country due to fear of political violence and intimidation. Five weeks later, that number has swelled by a further 110,000 frightened people,” UN High Commissioner for Human Rights Zeid Ra’ad Al Husseintold the Council.

“The attempted coup of 13 May, and the assassination of opposition leader Zedi Feruzi on Saturday, has further intensified tension,” he added, expressing alarm for the violence of the Imbonerakure militia, a strong supporter of President Nkurunziza’s government.

Burundi is a country with “deep and terrible knowledge of the potential consequences of outbreaks of violence,” and after a decade of growing recovery, and prosperity, these recent events are a “significant setback,” Zeid said.

He commended the efforts of the African Union, International Conference on the Great Lakes region, the East African Community, European Union (EU) and the UN Special Envoy for the Great Lakes to draw all actors to the negotiating table and protect human rights and the rule of law.

On a positive note, Zeid commended Tunisia for “turning its back on the oppression of the past,” and for its resolute adoption of human rights goals.

On the heels of his visit to the North African nation last month, the rights chief said that the country’s new Constitution is in line with international human rights standards and that legislation has been adopted to combat the persistent issue of torture.

Authorities have also made significant efforts regarding the rights of persons with disabilities and the freedom of the media.

“The entire Middle East and North Africa region would certainly look very different today if leaders of other countries had had the wisdom to take a similar approach,” he said.

In Europe and South-East Asia, people are “embarking on a desperate voyage out of fear and need,” and are merely fleeing the relentless conflict, wide -ranging oppression of their human rights and repression and persecution, Zeid said.

In the Mediterranean, over 1,800 have died at sea so far this year, and 7,000 people were rescued in just the first three days of this month, he told the Human Rights Council, expressing concern that the disproportionate focus on enforcement, and the militarization of that enforcement, raises a large number of concerns, beyond the urgent and absolute need to protect the lives.

“Any law enforcement response to migrant smuggling must respect international standards for human rights,” he stressed.

As for the European Agenda on Migration issued two weeks ago and which proposes quotas for the resettlement of 20,000 refugees within the EU, he said this small number of places is wholly inadequate to the magnitude of the crisis and urged far greater emphasis on expanding channels for migration into Europe, including for low-skilled labour and family reunification.

“A more humane, less mean-spirited response to their plight would be more worthy of Member States of the United Nations,” emphasized Zeid.

Meanwhile, in South-East Asia, in the first quarter of this year, 25,000 people have set out to sea from Myanmar and Bangladesh and at least 1,050 people have died at sea.

And many have been violently abused and robbed by the smugglers whom they paid to facilitate their voyage.

While Indonesia and Malaysia are providing a temporary lifesaver, it is not enough.

The Association of South-East Asian Nations (ASEAN), which committed itself in its Charter to human rights and humanitarian principles, must fulfil their obligations to search and rescue all those in peril at sea, and offer lasting protection to people who are fleeing persecution.

The treatment of the Rohingya, thousands of who are fleeing Myanmar, not only violates human rights norms, but complicates Myanmar’s relations with its neighbours.

“I hope the discrimination that targets this vulnerable minority will swiftly be reversed, and that the Rohingya will be able to take their rightful place in the country where they were born,” he said.

He also expressed dismay that in Australia, people on boats intercepted at sea are sent to detention centres, and he called for the protection of human rights at places of transit and at borders, and a “principled campaign” against xenophobia and discrimination.

Lastly, on South Sudan, he said that despite the best efforts of the African Union, Intergovernmental Authority for Development (IGAD) and the UN, in the past two weeks, more people have sought refuge at protection sites managed by the UN Mission in in the country, UNMISS.

“Some had to trek hundreds of kilometres by foot, and braved attacks by armed groups along the way,” he said.

Armed attacks also directly threaten some UNMISS protection sites, and 7 people were recently killed at one of the locations, in Upper Nile state. Humanitarian access has been severely constrained, and aid agencies have pulled out of several locations in Unity state due to fighting.

“It has been almost 18 months since this senseless conflict erupted, with virtually no accountability for the numerous violations of international humanitarian law and human rights law that have been committed,” he said.

The conflict itself is, at least in part, a direct consequence of unresolved issues from the past.

Previous cycles of violent attacks and killings, committed with absolute impunity, have left many people with unresolved grievances. It is therefore of the utmost importance that accountability remains a priority in seeking a resolution to the conflict.