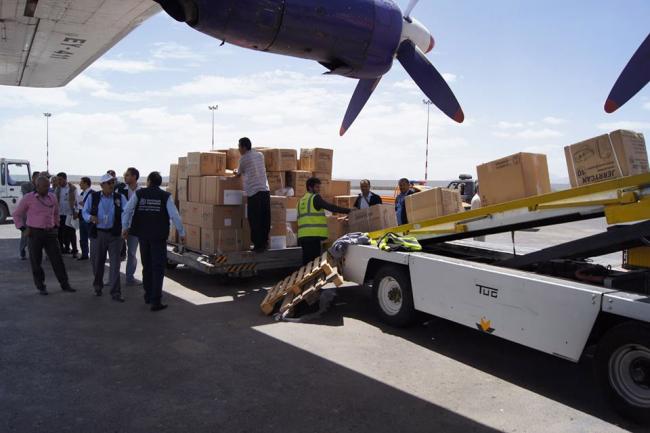 India Blooms News Service | | 27 May 2015, 08:40 am
#Ban calls for postponement of Yemen consultations
New York, May 27 (IBNS): Secretary-General Ban Ki-moon has requested that his Special Envoy to Yemen, Ismail Ould Cheikh Ahmed, postpone the planned consultations aimed at seeking a peaceful and Yemeni-led political transition process in the country, according to a United Nations spokesperson.

“The Secretary-General is disappointed that it has not been possible to commence such an important initiative at the soonest possible date and reiterates his call for all parties to engage in United Nations-facilitated consultations in good faith and without pre-conditions,” the Secretary-General’s spokesperson said in a statement issued in new York.

He said, “He also reiterates that the only durable resolution to the crisis in Yemen is an inclusive, negotiated political settlement.”

The consultations – originally scheduled to be held in Geneva on 28 May – would have brought together a broad range of actors including the Yemeni Government and other stakeholders in an effort to stem the ongoing violence afflicting the country.

According to the Office of the UN High Commissioner for Human Rights’ (OHCHR) latest estimations, at least 1,037 civilians, including 130 women and 234 children, lost their lives in Yemen between 26 March and 20 May, while at least another 2,453 civilians have been injured.

In Tuesday’s statement, the UN noted that Ban had instructed Ould Cheikh Ahmed “to redouble his efforts” to consult with the Yemeni Government, Yemen’s political groupings and countries in the region with the aim of producing “a comprehensive ceasefire and the resumption of peaceful dialogue and an orderly political transition.”

In addition, the Secretary-General urged all parties to be mindful of the suffering of Yemeni civilians, adding that he remained “acutely aware” that a postponement or delay in a return to the political process would ultimately exacerbate a steadily deepening humanitarian crisis.

A recent pause in fighting in the country permitted UN agencies to access areas which had been extremely difficult to reach.

In the first four days of the humanitarian pause, which ended on 17 May, relief workers dispatched enough food aid to cover one month of food needs for more than 273,000 people, delivered fuel to ensure safe water access for 1.2 million people, and transported or distributed enough essential non-food items for nearly 32,000 people.

Some 47 metric tonnes of medical supplies were given to hospitals and health facilities in five governorates.