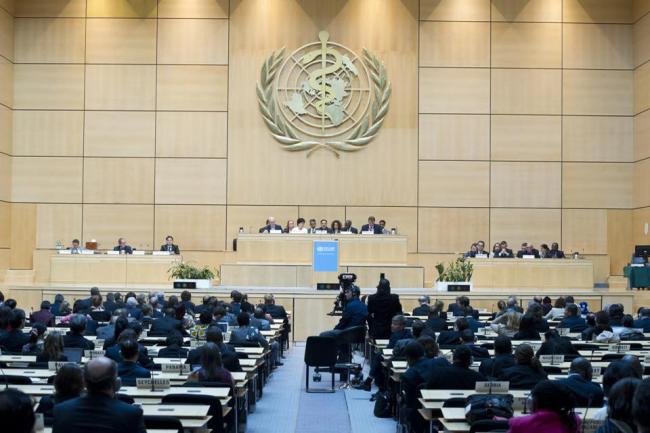 WHO governing body agreed on â€˜landmarkâ€™ reforms on emergency response

India Blooms News Service | | 27 May 2015, 08:36 am
#WHO governing body agreed on â€˜landmarkâ€™ reforms on emergency response
New York, May 27 (IBNS): The World Health Assembly wrapped up its work on Tuesday after giving the greenlight for the United Nations World Health Organization (WHO) to reform its emergency and response capacity to better tackle future disease outbreaks like Ebola, and agreeing to address antimicrobial resistance and air pollution, as well as improve access to affordable vaccines and set global nutrition targets.

WHO Director-General Dr. Margaret Chan noted that the agency’s governing board had passed several “landmark resolutions and decisions” including three new resolutions passed on tuesday: one on air pollution, one on epilepsy, one laying out the next steps in finalizing a framework of engagement with non-State actors.

Over the weekend, delegates at the 68th World Health Assembly, which had been meeting in Geneva, Switzerland, since 18 May, gave the go-ahead for WHO to “establish an emergency programme, which will be guided by an all-hazards health emergency approach, that emphasizes adaptability, flexibility and accountability, humanitarian principles, predictability, timeliness and country ownership.”

WHO will set up a $100-million contingency fund to provide financing for in-field operations for up to 3 months. The contingency fund will run initially as a two-year pilot and will then be evaluated.

Delegates noted their appreciation for the key coordination role played by WHO in its ongoing work to develop vaccines, diagnostics and drugs for Ebola virus disease.

Also over the weekend, the Assembly endorsed a global action plan to tackle antimicrobial resistance – including antibiotic resistance, “the most urgent drug resistance trend.”

In addition, the Assembly agreed on resolution to improve access to sustainable supplies of affordable vaccines – a key issue for low- and middle-income countries aiming to extend immunization to the entire population.

And today, the delegates adopted a resolution to address the health impacts of air pollution – the world’s largest single environmental health risk.

It stated, “This was the first time the Health Assembly had debated the topic.”

The Assembly also asked Member States to strengthen their efforts in providing care for people with epilepsy.

“The resolution calls on the WHO Secretariat to continue to lead and coordinate support to Member States in addressing the global burden of epilepsy so that people with epilepsy can receive timely treatment and can benefit from educational and occupational opportunities, free from stigma and discrimination,” it said.

And finally, the Assembly today welcomed the fact that delegates had reached consensus on many parts of the draft framework of engagement with non-State actors such as non-governmental organizations, private sector entities, philanthropic foundations and academic institutions, noting that it wishes to finalize the framework by the next Health Assembly.

The World Health Assembly is the supreme decision-making body of WHO. It is attended by delegations from all WHO Member States and its main functions are to determine the policies of the Organization, supervise financial policies, and review and approve the proposed programme budget.