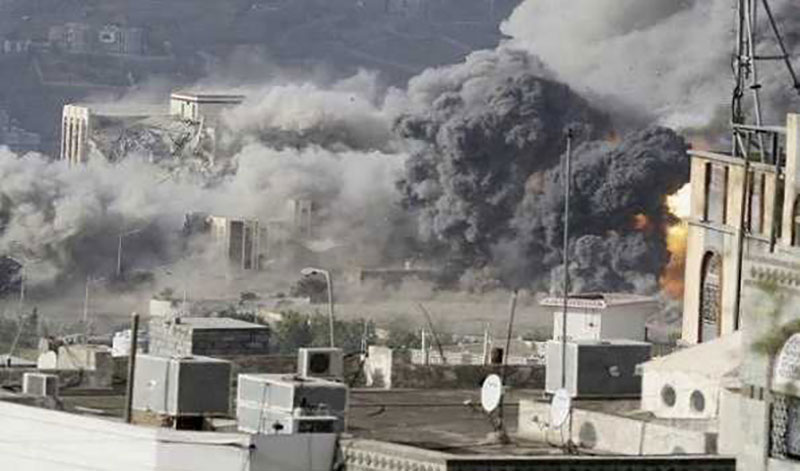 Sana’a/Tehran/UNI: Saudi Arabian jets bombed the Yemeni parliament building and a military academy in Sanaa early on Tuesday morning, in retaliation for the Houthi drone attack on the Adnoc tanker area in Abu Dhabi on Monday in which three people, including two Indians, were killed.

The Saudi coalition on Monday announced the beginning of multiple airstrikes on the Yemeni capital, and continued its bombing attacks throughout the night.

Saudi jets attacked the Al-Libi district in the northwest of the Yemeni capital, destroying five residential buildings, and damaging dozens of homes nearby. Twenty-three people have been killed, including women and children, and some people are still trapped under the rubble, reports said.

The attacks came after the Houthi rebels on Monday said they had struck areas deep inside the United Arab Emirates with 20 UAVs and 10 ballistic missiles.

The three oil tankers had exploded in a drone attack in the al-Musaffah district in the UAE on Monday.

The blast was followed by a large fire in the al-Muṣaffah area and parts of Abu Dhabi airport.

Three people – two Indians and a Pakistani national - were killed and 6 others were injured.

The attack came a few days after Houthi leader Mohamed al-Bukhaiti, a member of Yemen's Supreme Political Council, warned the UAE not to continue its “aggressive moves” in the south of Yemen otherwise it would be targeted deep inside its territories by Yemenis.

On Monday evening, Houthi military general Brigadier-General Yahya Saree warned the UAE that it would not be safe if it continued its escalation against Yemen.

The Yemeni Joint Meeting Parties of the Houthis vowed that their “operation will not be the last if the aggression continues." The parties said that the price that the UAE is paying "confirms that any country that targets Yemen, violates its sovereignty and independence, and occupies its islands will not be safe from targeting”.

The Houthi attack came after what the Yemenis see as the UAE playing a pivotal role in deploying southern Yemeni forces in the Shabwa governorate. Abu Dhabi also stepped up its military activities in support of Saudi Arabia’s war in Yemen, something that enraged the Sanaa forces who announced that they have seized a UAE-flagged ship off the coast of Hudaydah port in western Yemen. The seized ship, named Rawabi, was carrying military equipment, according to footage of the ship provided by Sanaa. Seven Indian sailors are being held captive on board the ship, besides four others from other countries. India has urged the Houthis to release the Indian sailors.

While the UAE has sought to distance itself from the war in Yemen, the Yemenis see “a direct Emirati role in the developments in Shabwa and elsewhere in Yemen”, said media reports.

Mohammad Abdulsalam, the official spokesman of the Ansarallah and head of the Sanaa delegation for peace negotiations, warned that the UAE’s “hand will be cut off” if it continued to interfere in Yemen.

“A small state in the region desperate to serve America and Israel had claimed that it distanced itself from Yemen, but it has recently been exposed, contrary to what it claimed,” Abdulsalam said in his channel on Telegram messaging app.

He said if the UAE refuses to stop tampering in Yemen, its hands will be cut off.

Yemeni officials have signaled that Monday’s military attack against the UAE was a punitive message to it.

“The punitive message that was supposed to reach the Emirates and its dwarves has reached,” Dhaif Allah Alshami, senior Houthi leader and information minister of Yemen, said on Twitter.