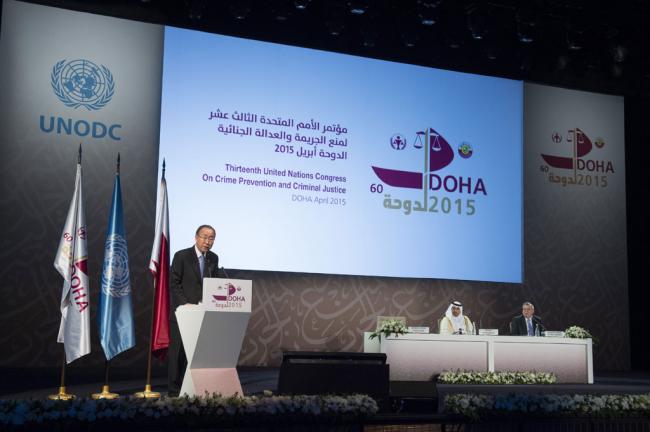 “All societies need fair criminal justice systems, effective, accountable institutions, and access to justice for all,” Ban said in his keynote address at the opening ceremony of the Crime Congress.

“There can be no sustainable development without human rights and the rule of law,” the Secretary-General continued.

Hundreds of policymakers and practitioners in the area of crime prevention and criminal justice, as well as experts from academia, representatives of intergovernmental and non-governmental organizations, specialized agencies and other UN entities, and media are attending the forum, which is held every five years.

The Doha Crime Congress, running through 19 April, was opened by the Prime Minister of Qatar, Abdullah bin Nasser bin Khalifa Al Thani. The Congress takes place several months ahead of a major summit on the future global development agenda, scheduled to take place at UN Headquarters in September.

“This September, Member States will consider a post-2015 development agenda that can pave the way to a better future for billions of people,” Ban said.

He added, “Success requires that the new agenda and sustainable development goals reflect the centrality of the rule of law.”

The Secretary-General called international cooperation and coordination critical, particularly in areas such as combating transnational organized crime and terrorism.

“I encourage every country to ratify and implement the conventions against drugs, crime and corruption, and the international instruments against terrorism, and to support the important and varied work of the UN Office on Drugs and Crime,” he added.

He said, “We must also adapt to changing times. Cybercrime has now become a business which exceeds billions of dollars a years in online fraud, identity theft, and lost intellectual property. It affects millions of people around the world, as well as businesses and governments.”

During the ceremony, three representatives of the Youth Forum, which took place before the Congress, delivered to the participants the Doha Youth Forum statement, which includes their recommendations on the main themes that will be discussed at the Congress.

General Assembly President Sam Kutesa said that the Crime Congress is “an important forum to focus on crimes affecting the ability of millions of people around the world to realize a life of prosperity and dignity”.

Kutesa called on participants “to use this forum to generate concrete ideas that can positively contribute to the on-going negotiating process for the post-2015 development agenda in the area of crime prevention and criminal justice”.

“We are all gathered here to further advance our united response to crime,” Sajdik said.

He added, “Although planned already years ago the timing of our congress cannot be better. After the Sendai Conference on Disaster Risk Reduction of last March our congress here is another landmark meeting in this absolutely crucial year for global development.”

Fedotov said that the meeting offers a timely opportunity to further advance global action, and promote a holistic approach that integrates effective crime prevention and criminal justice measures into the wider UN agenda, including work on gender equality and the protection of children.

“The Congress is an excellent opportunity to extend and enhance international cooperation to counter transnational organized crime, terrorism and illicit financial flows, and to ensure that our responses are fast, smart and able to cope with new threats,” he added.

At a press conference later this afternoon, Secretary-General Ban Ki-moon congratulated the Prime Minister of Qatar on the successful adoption of the Doha Declaration.

“I believe the Declaration to be implementable, concise and achievable,” he said.

“I expect the Conference to be action-driven. It should provide a platform for increased cooperation between governments, intergovernmental organizations and civil society on the whole spectrum of crime prevention and criminal justice issues,” he added.

This year's meeting - expected to conclude on Friday, 19 April - marks the 60th anniversary of the Crime Congress.