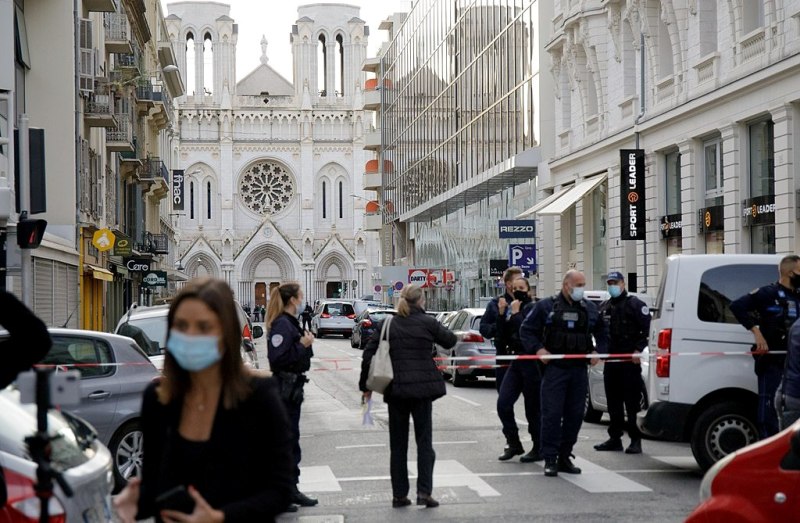 Nice Incident: Attacker arrived in France from Tunisia days ago

Nice: French officials on Friday said the man who stabbed two women and a man to death in a church in France arrived from Tunisia days ago, media reports said.

The suspect, 21, had an Italian Red Cross document, issued after he arrived by a migrant boat to Italy's Lampedusa island last month. He was shot by police and is in a critical condition, reports BBC.

One of the victims of Thursday's attack at the Notre-Dame basilica in the city of Nice was "virtually beheaded", BBC reports.

The country's president Emmanuel Macron described the incident as an "Islamist terrorist attack".

Macron said they will be increasing the number of soldiers to protect public places - such as churches and schools - from 3,000 to 7,000, even as the country's security alert has been raised to the highest level.

Thursday's stabbings comes days after another attack earlier this month near a school north-west of Paris, where Samuel Paty, a teacher, was beheaded days after showing controversial cartoons of the Prophet Muhammad to some of his pupils.

That murder heightened tensions in France and beyond, as Macron defended the right to publish the cartoons and as his government attempted to crack down on radical Islam angered Turkey and other Muslim-majority countries.

The suspect in the Nice attack was heard repeatedly shouting "Allahu Akbar" (God is greatest) before being shot by police.

"We also found a bag left by the attacker. Next to this bag were two knives that were not used in the attack," he added.

A Brazilian citizen was killed during the Thursday stabbing attack in the southern French city of Nice, Brazilian Foreign Minister Ernesto Araujo tweeted.