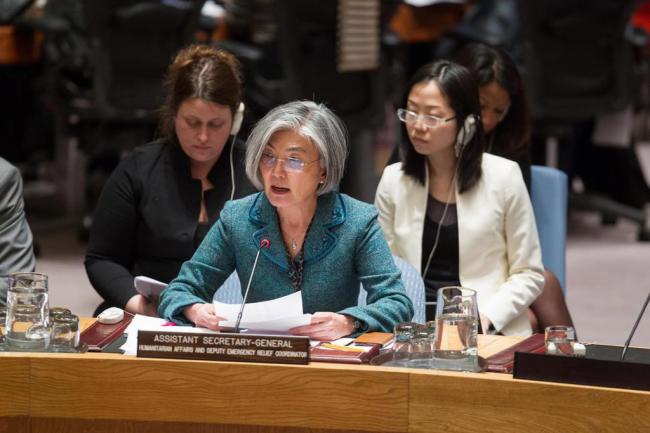 India Blooms News Service | | 27 Feb 2015, 08:25 am
#Syria war continues unabated says Security Council
New York, Feb 27 (IBNS): In a briefing to the Security Council on the humanitarian situation in Syria, two United Nations relief officials warned on Thursday that as the conflict enters its fifth year, the violence and brutality continue unabated and with total impunity.

“Every month we report on the same violations. The numbers change, but the pattern remains the same. The parties to the conflict continue to act with impunity: killing and abducting civilians; denying access; removing vital supplies from convoys. This pattern must be broken,” Kang stressed.

Over 2 million people in Aleppo and Dar’a Governorates have been affected by wilful denial of water and electricity by parties to the conflict this month. Of the 212,000 people who are besieged, in conditions that deteriorate every day, only 304 were reached with food in January.

In other areas where conditions deteriorate every day, parties to the conflict severely restrict access to those in need. In Raqqa and Deir ez Zor, the Islamic State of Iraq and the Levant (ISIL) has closed down the offices of several aid organisations, including the Syrian Arab Red Crescent.

“Some 600,000 people have not received food assistance in these governorates since last December. The sick or wounded often have nowhere safe to get treatment,” said Kang.

The World Health Organisation (WHO) has succeeded in sending life-saving medicine and medical supplies from Damascus to rural Aleppo for some 65,000 treatments but many of the surgical items including midwifery and reproductive kits were removed by Government security personnel at one of the checkpoints.

The Council must do everything in its power to hold parties accountable and ensure that aid is delivered to people in need. Humanitarian organizations operating in besieged Syria and in neighbouring countries continue to reach millions of people every month.

In January, some 3.4 million people were reached with food assistance while hundreds of thousands were also reached with medicines, household items and other supplies.

“But it is not enough. More effort must be made to deescalate the violence, protect and enable humanitarian organisations to give more support,” the Special Coordinator said, emphasising the need to secure the freeze in fighting in some parties of Aleppo so that humanitarian agencies can deliver food, remove debris and get children back into school.

Kang said she was extremely concerned that two UN Office for Coordination of Humanitarian Affairs (OCHA) staff has been asked to leave the country without any reason given. “This will hinder our work tremendously,” she said, urging the Government to reverse its decision.

OCHA’s response cannot keep up with the needs of Syria’s people because there is simply not enough funding. By the end of last year, the Syria Humanitarian Assistance Response Plan for 2014 was just 48 per cent funded.

Lack of funding has already forced the World Food Programme (WFP) to reduce rations by 30 per cent. And for every million dollars that WHO cannot raise in Syria, some 227,000 people lose vital health services. And unless urgent funding is received before May 2015, a million children will not be able to access education.

Kang said she looked forward to the next pledging conference to be held on 31 March in Kuwait, expressing hope that the funds acquired there will make a difference on the ground.

Echoing that sentiment, UNHCR head António Guterres, said that the Kuwait III conference will play a determining role in stabilizing the situation in the refugee hosting countries because international support has been far from keeping pace with the magnitude of needs.

The Syrian refugee crisis has overwhelmed existing response capacities with 3.8 million registered in neighbouring countries. In Lebanon and Jordan, these populations have grown exponentially and Turkey is now the biggest refugee-hosting country in the world.

“The continued growth in displacement is staggering. And the nature of the refugee crisis is changing. As the level of despair rises, the available protection space shrinks, we are approaching a dangerous turning point,” Guterres warned.

Refugee resources are depleted and living conditions are drastically deteriorating. Host communities are severely overstretched. And the refugee influx has heavily impacted the economies and societies of Lebanon, Jordan and Northern Iraq in particular, overwhelming resources.

Almost two million Syrian refugees under 18 years of age risk becoming a lost generation and many of the over 100,000 refugee children born in exile could become stateless under Syrian law. If not addressed properly, this crisis-in-the-making will have huge consequences for the region.