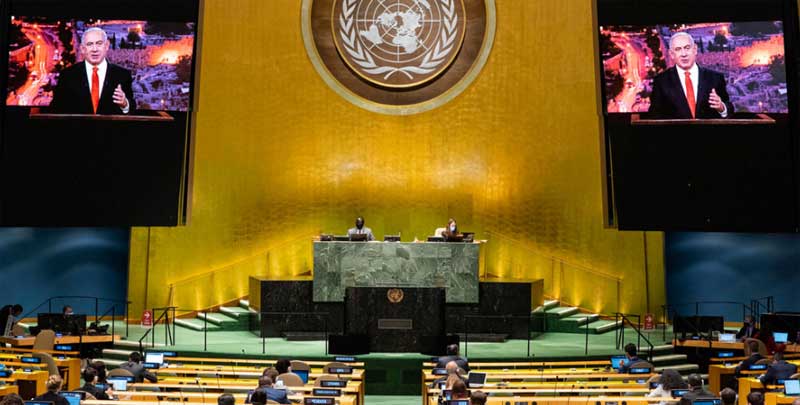 New York: While telling the UN General Assembly on Tuesday there was “good news” to report about the “expanding circle of peace” between Israel and some Arab countries, Prime Minister Benjamin Netanyahu also accused Hezbollah militants of storing weapons in a residential area of Beirut.

Opening his video address, pre-recorded due to the coronavirus pandemic, on a positive note, Mr. Netanyahu said that while the Middle East “is not exactly renowned” for producing good news, the recent agreements between Israel, and Bahrain and the United Arab Emirates, respectively, would bring their peoples the “blessings of peace” and the enormous benefits through increased trade, investment and commerce.

The Prime Minister said that he had “no doubt that more Arab and Muslim countries will be joining the circle of peace, soon, very soon.”

“This good news about peace came about because of a clear break with the failed strategies of the past,” he added.

Mr. Netanyahu said that for decades, all progress was halted because of “completely unrealistic Palestinian demands”, demands – he said – were “complete non-starters for any responsible Israeli Government.”

He also spoke of the President of the United States, who chose a path “anchored in reality”, recognizing Jerusalem as Israel’s capital, Israel’s sovereignty over the Golan Heights, and put forward a realistic peace plan that recognizes Israel’s right, addresses its security needs and provides the Palestinians with a dignified realistic path forward if they make peace with Israel.

In his address, Prime Minister Netanyahu also spoke of the threat to his country and other Arab States, posed by Iran.

“Iran wantonly and repeatedly attacks its neighbours, and its terror proxies are directly involved in violence throughout the Middle East, including in Iraq, Syria, Yemen, Gaza and of course, Lebanon,” he added, recalling the explosion in the port of Beirut in early August.

Mr. Netanyahu also accused Hezbollah of keeping a “secret arms depot” near Beirut’s airport, near Janah, an area with civilian buildings and energy infrastructure, noting that if the depot explodes, “it’s another tragedy,” he said referring to the 4 August blast that ripped through the Lebanese capital’s port area, killing nearly 200 people and leaving hundreds of thousands homeless.

To the people living near Janah, he said: “You’ve got to act now. You've got to protest this. Because if this thing explodes, it's another tragedy.”

The Prime Minister of Israel went on to commend US President Donald Trump for “withdrawing from the flawed nuclear deal with Iran,” adding that he had opposed the deal from the very outset.

Wrapping up his address, Prime Minister Netanyahu called on all members of the Security Council to stand with the US against Iran’s aggression and in insisting that Iran end its nuclear weapons programme once and for all.

“Stand with the US in confronting the greatest danger to peace in our region,” he continued.

“And if you do, I am confident that in the years ahead we will be able to celebrate more good news from the Middle East.”