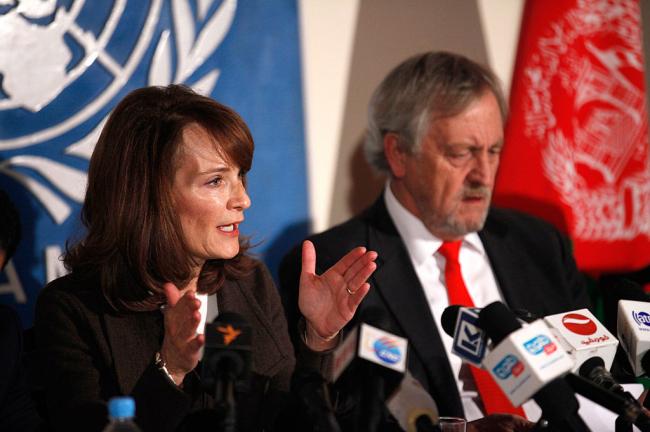 India Blooms News Service | | 26 Feb 2015, 09:31 am
#UN report pushes to end torture in Afghan prisons
New York, Feb 26 (IBNS): The Government of Afghanistanâ€™s efforts to prevent torture and ill-treatment have shown some progress over the last two years but much more remains to be done, the United Nations Assistance Mission in Afghanistan (UNAMA) confirmed on Wednesday as it released its latest report on the treatment of conflict-related detainees in Afghan custody.

“UNAMA’s finding that torture of conflict-related detainees persists in spite of Government efforts over 2013-14 to address it is a source of serious concern,” said the UNAMA Human Rights Director, Georgette Gagnon, in a statement.

She said, “Continuing impunity for the use of torture allows torture to continue.”

The report, the third of its kind, and jointly produced with the Office of the UN High Commissioner for Human Rights (OHCHR), is based on interviews with 790 conflict-related detainees between February 2013 and December 2014, and highlights ill-treatment and torture during the arrest and interrogation phases in numerous facilities across the country with many alleged members of the Taliban and other anti-Government groups subjected to “severe pain and suffering, aimed mainly at obtaining a confession or information.”

Overall, 16 methods of torture and ill-treatment were described including severe beatings with pipes, cables and sticks, suspension, electric shocks and near-asphyxiation. The report also documents a “persistent lack of accountability” with only one criminal prosecution for torture observed since 2010, despite numerous verified incidents raised with officials over the course of the reporting period.

Although torture is prohibited and criminalized under Afghanistan’s Constitution and laws and under international law, UNAMA’s findings note that the country’s National Directorate of Security and the Ministry of Interior accountability and oversight mechanisms remain “inadequate, lacking independence, authority, transparency and capacity.”

“Accountability, particularly the prosecution of both those who perpetrate and administer torture, and those who order or condone it, is a key means of signalling political commitment at the highest levels to end it,” Gagnon continued.

Twenty out of 71 interviewed detainees reported having experienced torture or ill-treatment following their transfer to Afghan custody in 2013-14, including in Afghan facilities the International Security Assistance Force had certified as not using torture. Moreover, the report points out that many Afghan security and police officials interviewed appeared not to accept that torture is illegal, instead viewing it as an appropriate method by which to extract valuable information.

“Torture is a very serious crime, for which there can be no justification. The international prohibition is absolute,” UN High Commissioner for Human Rights Zeid Ra’ad Al Hussein stressed in the statement.

Zeid said, “We have seen many examples showing how its use undermines national security and proves counter-productive.”

In addition, he pointed out that both the Afghan Constitution and the Criminal Procedure Code include due process guarantees to protect detainees from the use of torture and ill-treatment, including the prohibition of using evidence gained through torture.

Nevertheless, the report also shows a 14 per cent decrease in the number of detainees tortured or ill-treated compared to the previous reporting period.

Nicholas Haysom, the UN Secretary-General’s Special Representative for Afghanistan and head of UNAMA, confirmed the Mission’s steadfast willingness to assist the authorities in improving accountability mechanisms in an effort to further reduce the instance of torture across the country.

“UNAMA welcomes the incoming Government’s commitment to implement a new national plan on elimination of torture,” he said.

He added, “We support, and can assist as requested, this comprehensive approach to eliminate torture and ill-treatment in Government of Afghanistan facilities.”