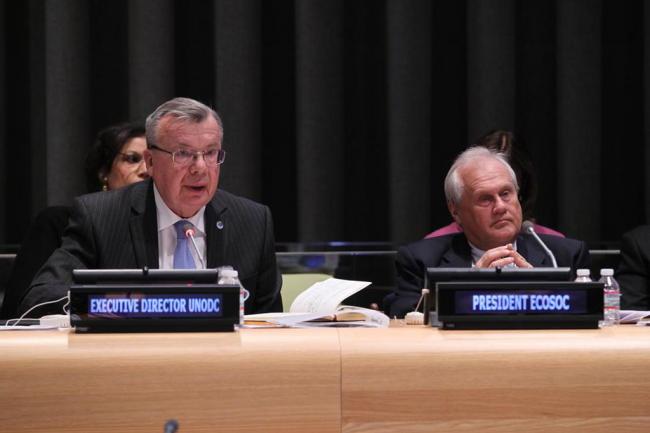 India Blooms News Service | | 26 Feb 2015, 09:27 am
#UN assembly says cutting crime important for sustainable growth
New York, Feb 26 (IBNS): Reducing violent crime is critical to sustainable development, the top United Nations ant-crime official told the General Assembly on Wednesday, spotlighting that while global progress has been made in combatting the scourge, homicide levels in low and lower-middle income countries have increased by 10 per cent over the last decade.

According to the UN Office on Drugs and Crime (UNODC), in 2013, the homicide rate in these countries was on average 2.5 times the rate in high-income countries.

“Reducing crime and violence and ensuring the rule of law are manifestly important to the everyday lives of people – to protect the vulnerable from exploitation, stop corruption from eroding public services, and free young people from the downward spiral of poverty, drugs, crime and violence,” said UNODC Executive Director Yury Fedotov at a high-level General Assembly thematic session on ‘Integrating Crime Prevention and Criminal Justice in the Post-2015 Development Agenda.’

The gathering precedes the 13th UN Crime Congress to be held in Doha this April, and which is the largest gathering of governments, civil society and experts in the area of crime prevention and criminal justice.

Kicking off the session alongside Fedotov was, among other UN officials, Martin Sajdik, President of the Economic and Social Council (ECOSOC) as well as the Permanent Representative of Austria, Qatar’s Foreign Minister via video message, and the Former President of Slovenia.

Following their opening remarks, two panel discussions were held on successes and challenges of crime policies and on fostering international cooperation.

Its work is based on globally agreed frameworks, among them the UN Convention against Transnational Organized Crime and its three protocols, the Convention Against Corruption, the international drug control conventions, the universal legal instruments against terrorism and UN standards and norms on crime prevention and criminal justice.

Fedotov on Wednesday stressed the importance of garnering support for these international treaties, “While much remains to be done for Member States to effectively implement their commitments, these frameworks provide a sound basis for addressing challenges to the rule of law and justice, strengthening institutions and promoting international cooperation in support of sustainable, equitable development.”

Furthermore, the UNODC chief called for “genuine ownership” on the part of States and tools to measure whether countries are upholding their commitments. Strengthening national statistical systems to provide high-quality crime and criminal justice data should also be a priority.

In his remarks, UN Deputy Secretary-General Jan Eliasson echoed that call to the Assembly, saying that all countries need effective crime prevention and criminal justice systems that adhere to due process and guarantees of fair trial.

Stressing that more must be done to safeguard sustainable development through effective crime prevention and the promotion of human rights, Eliasson called for a “holistic approach” to deal with crime.

He said, “As we move forward with our plans for transformative sustainable development, we must acknowledge the debilitating and destabilizing effects of crime and violence.”

“Insecurity corruption and crime impede access to health, education and other basic services. They undermine trade and commercial relations, job opportunities and the protection of property. All this harms individuals and damages societies. A deeply worrying trend is the growing relationship between organised crime and terrorism,” he added.

Like Fedotov, the Deputy Secretary-General urged nations to adopt international instruments on terrorism, drug control, corruption, human trafficking and smuggling of migrants and firearms, and emphasised that governments and the global community need detailed crime research and analysis to make effective policy choices.

President of the General Assembly, Sam Kutesa, in his remarks said crime prevention and access to justice “go hand-in-hand” with many critically important development objectives including the eradication of poverty and increasing access to health care, education, water and energy.

Calling protection against crime and violence “one of the most fundamental pre-requisites for leading a dignified, productive life,” he said crime weakens State authority, fuels corruption, harms already fragile economies and undermines quality of life. Modern crime has great reach and considerable influence. It transcends borders and grows in size and scope.

Hence, the rule of law must be a fundamental principle integrated into the core of the UN’s work. That starts with States’ commitment to international law, Kutesa said encouraging the adoption of Conventions against transnational Organized Crime and against Corruption.

“The centrepiece of our efforts should be criminal justice reform, aimed at access to justice and the promotion of an independent judiciary.”